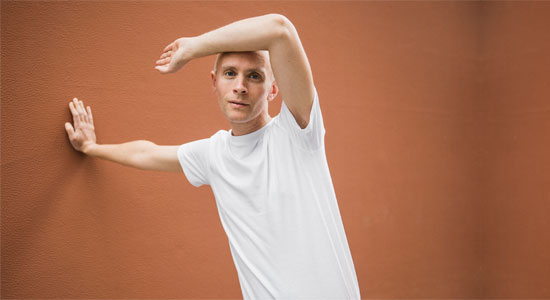 How, with Life Will See You Now, Jens Lekman got his groove back

Newton’s Third Law of Motion states that for every action, there is an equal and opposite reaction. Swedish troubadour Jens Lekman understands this all too clearly.

As the Gothenburg native was putting the finishing touches on the follow-up to his last record, 2014’s breakup-themed I Know What Love Isn’t a couple of years ago—a beta version of what would become his new Life Will See You Now—he proudly played those early tracks to his label and close friends whom he always relied on to sagely assess his work. Everyone agreed that it was his fourth-best album. “Which isn’t really a great compliment when it actually was my fourth album,” he sighs, despondently. “So I was sort of in a crisis, and it triggered a reaction in me where I just didn’t feel like writing anymore.”

What did the 36-year-old Lekman turn to instead? Believe it or not, push-ups: real, honest-to-goodness daily exercise, revolving around actual push-ups. “Every day, I was waking up and doing a hundred, and I was doing them for a while,” he says. “And it was sort of like a way of having some sort of routine, just forcing myself to keep going in the end of my post-breakup phase. So I realized that I had to do something quite drastic, and that’s when I came up with my idea for Postcards. And at the end of that phase? I had a bunch of songs.”

The labor that Lekman set for himself with Postcards was Herculean. For free, he would write, record, then post a brand-new tune every week for an entire year, 52 in all, two of which made it onto Life, as well—the whimsical, handclap-rhythmic reflection “Postcard #17” and “Postcard #29,” a symphonic, horn-punched Europop anthem now redubbed “How We Met, The Long Version.” Composing on such a tight schedule was every bit as demanding as all those push-ups, he adds. “In the beginning, it was like, ‘Oh, crap! What did I get myself into?’” he says. “Because I’ve always had this thing where I want control. I want to polish everything. So in the beginning, it freaked me out that in one week, I had to release a new song, just as it was. But eventually, I just started letting go.”

Lekman started multitasking, writing new material while riding his bike or taking the city tramline across town. Lyrically, he would center on whatever he’d been thinking about that particular day, or what was in the news that week, even average conversations he’d had with chums the night before.

“I had a sort of South Park approach to it,” he says. “Like the way they make South Park, where they write the episode that week, just to capture something that’s current. And it was great, because there were a few things that happened in 2015 where I thought, ‘I can write about this right now.’ And if I’d had to wait half a year to release it on record, maybe people would have forgotten about it or it just wouldn’t be very interesting anymore.”

In 2000, the warm, neighborly voiced vocalist had caught the music bug playing bass in a local cover band, and he was soon writing originals and home-tracking them on CD-R, under the moniker of Rocky Dennis, which he’d borrowed from Eric Stoltz’s real-life character in the movie Mask. By 2003, he’d signed to Swedish imprint Service Records for his Maple Leaves EP, and a year later he was snapped up on these shores by Secretly Canadian for his full-length debut, When I Said I Wanted To Be Your Dog. But even after his arduous Postcards trek, he still wasn’t quite ready to start work on Life yet.

Life itself had other plans for his talent at the close of 2015. An art center in far-off Cincinnati contacted him with a proposal; they were suitably awed by the Postcards project and wondered if he would like take up a residency there for another potential experiment. It just so happened that he had another artistic idea he’d been toying with in Sweden, which he happily brought to Ohio: Ghostwriting, wherein he took fan-submitted personal stories and transformed them into tunes. “It was one of the most nerve-wracking experiences of my life,” says Lekman.

First, he advertised for autobiographical submissions from fans. Then he interviewed each selected entrant for 30 minutes to ascertain every last detail. Then he settled into the alchemy of turning this base metal into respectful, relatable gold. “I think it’s easier for people to share their most intimate secrets with a complete stranger rather than with friends, so a lot of people had these amazing stories that they’d been keeping inside of them, and it was quite mind-blowing­—that feeling of holding this very important story from someone else’s life and knowing that you’re responsible for it, and how it comes out in song,” he says. “It was even harder, eventually performing it live, knowing they were in the room, listening.”

With a total of 68 new numbers to his credit in a single year, Lekman’s creative tap was virtually overflowing. With producer Ewan Pearson, he began shaping a Mach Two take on Life, starting with tropical-exotic bass workout “What’s That Perfume That You Wear?” which closes the door on his old relationship with gentle, scent-wafted finality: “And it smells so good, that sandalwood/The lavender, lemon, ginger … She’s gone forever.”

“That song is almost like a bookend to the last record,” he says. “And I like having little bridges between the records, almost like a recap when you’re watching a show on TV, like, ‘Here’s what happened on the last season!’ That song works like that.”

Elsewhere, Lekman’s wry lyrical thoughts unspool in a flickering, James Thurber-ish flow. On the ’70s-soulful “Evening Prayer,” he introduces a lovesick student who can’t discern a classmate’s true feelings for him with, “At art school there is a 3-D printer/And he prints out a model of the tumor that was surgically removed from his back this winter/In its rugged gray plastic it looks lunar/He puts the tumor in his breast pocket as we head out.”

“To Know Your Mission” follows a young Mormon missionary through a Gothenburg morning in 1997 as he suddenly has spiritual doubts while listening to Puff Daddy and Chumbawamba on the radio. Over jazzy keyboard lilt “Hotwire The Ferris Wheel,” he encapsulates that childhood whiff of the foreign and exotic when “There’s a carnival in town/Walking your dog past the old fairground/From inside we hear screaming and laughter/From roller coasters and merry-go-rounds.”
Lekman wanted to tie everything together with the Life Will See You Now cover, a Lynda Barry-style painting of a green-haired girl with a nose ring, done by a graphic-novelist friend. Who is she? He laughs, “Why, she is you, waiting for your life to start!” he says. “My interpretation is that she’s sitting in a waiting room, waiting for life to see her, like the title suggests. But other people have said that she’s dressed up almost like, ‘Life will see me now,’ like she’s prepared for it, and she’s toughened up.”

Either way, the decidedly angry-looking character—like Lekman himself—is certainly reacting to something.