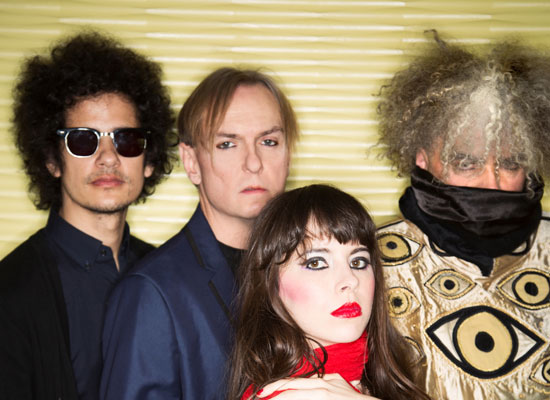 Crystal Fairy is much more than the sum of its parts

It began, as these things often do, with Jello Biafra. In 2014, S.F. punk’s eminence grise invited Mexican garage-punk band Le Butcherettes to open for the Guantanamo School Of Medicine at the Roxy in West Hollywood. Melvins’ King Buzzo, a friend of Biafra, came out to show support and catch the set. And when Le Butcherettes, fronted by Teri Gender Bender, hit the stage, Buzzo was blown away.

So impressed was Buzzo by Le Butcherettes’ performance that he asked the band to open for Melvins on a series of tour dates—a significant move for a guy who’s ordinarily reluctant to slot opening acts.

“My agent told me, ‘This is really rare.’ I actually cried a little bit,” laughs Teri G-B. “I was like, ‘Of course let’s go on tour with the Melvins!’ And they were such sweet gentlemen.”

That tour was followed by another set of opening dates, for which Le Butcherettes and Melvins worked up a collaborative live cover of Bikini Kill’s “Rebel Girl.” “At that point I knew we needed to do something together,” says Buzzo, “but I didn’t know what.”

Backstage at those same shows was Butcherettes producer (and G-B’s El Paso neighbor) Omar Rodríguez-López, he of At The Drive-In and the Mars Volta—not to play but to photograph and document the tour. He and Melvins hit it off, and the final piece of the puzzle that would become Crystal Fairy snapped into place.

Written and recorded at white-hot speed in studios in L.A. (Melvins’ home base) and El Paso (Butcherettes’), Crystal Fairy is a record that comes out punching and never lets up. Melvins’ Dale Crover and Buzzo, joined by Rodríguez-López and G-B, run through 11 songs in a thunderous 41 minutes—some crisp and pounding (“Chiseler”), some stately and heavy (“Moth Tongue”), some giddy and angular (“Vampire X-Mas”), some joyously, liberatingly bizarre (the irresistible title cut). Considering how quickly it came together, Crystal Fairy sounds remarkably cohesive—the work of a band whose energies were pointed in a single direction from the start.

“From inception to recording, it took two weeks,” says Buzzo. “If that. We’re all used to working very fast. I’m a very big believer in vision-execute. You get the right people around you, and it works—you have to try really, really hard to blow it. And we’ve all worked on our craft for a really long time. People who’ve worked on their craft for this long, it’s really down to luck. Hard work and pure luck.”

The L.A. sessions came first. “Buzz said, ‘OK, let’s put it all on the table,’” says G-B. “We recorded the rehearsals, even the ideas for songs as they came. And I had my notebook with me, and I was writing lyrics and melodies for the ideas they came up with.”

“In those kinds of situations,” says Buzzo, “I’m a firm believer in letting people off the leash: ‘Just do what you do.’ The first day, when we recorded ‘Bent Teeth,’ I just knew it was good.”

For G-B, something clicked just past the halfway point: “It started becoming a reality when we were about six songs deep. And then Buzz and Dale came out to El Paso where Omar and I live, and it was this exchange of cultural identities, and on that basis, too, it was really exciting. El Paso’s a little more spread out, and there’s less to do at night if you’re a party person, which thankfully none of us are, so we got to spend a lot of quality time, in the real sense of the word—we’d all watch movies at night, then get up, go into the studio, work out a part, then, ‘OK, let’s go to IHOP.’ Honestly, talking about this, I can’t believe it’s real. You get a sense of the energy in the room, and you think, ‘OK, there’s something here. These people, they’re my tribe.’”

“We didn’t even know it was going to be an album,” says Buzzo. “And then we had one.”