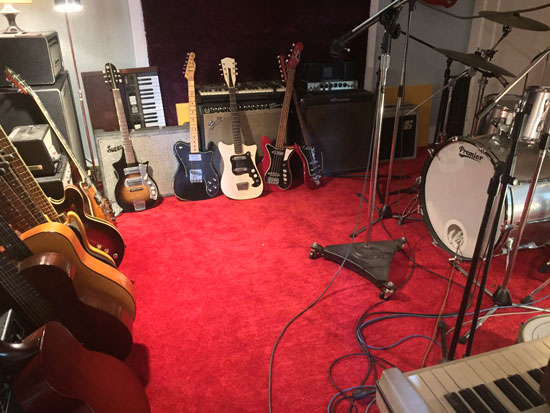 Falkner: To me, a vintage instrument (guitar in particular) is alive. It’s alive! It’s not just a few pieces of wood with strings and electronic guts. About 15 years ago, the vintage-guitar market exploded and prices soared unreasonably. I had a few pricy collectible guitars at the time, but for one reason or another (gotta pay rent, yo) had to sell most of my top shelf. This boom in prices kind of forced me to start looking at the lesser-known manufactures and models because I couldn’t afford the 335s or Les Pauls anymore. Not unlike my quest for vinyl obscurities, I became obsessed with finding ultra rare but highly playable vintage guitars. Now this is pretty much an oxymoron. Usually when you’ve never heard of or seen a particular vintage guitar it’s because the thing is an unplayable POS. Happy to report that after a couple decades of taking a chance because of a cool design or affiliation to another known manufacturer, I have amassed a small-but-ultra-personal collection of highly playable unique oddballs.