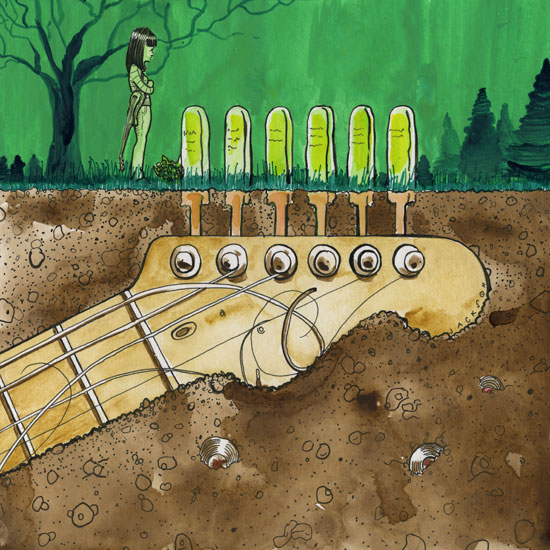 It seems quaint from this perspective, the obsession people seemed to have about rock ’n’ roll music’s supremacy back in the ’50s, ’60s, ’70s, ’80s and into the ’90s. It doesn’t help that those three specifically relevant tunes actually prove themselves wrong before the needle reaches the end of the groove. (Note to millennials: That was how recorded music was played when those songs were released.)

In the Danny And The Juniors hit, the second verse says that rock ’n’ roll will “go down in history,” which is something you don’t do if you haven’t died. Pete Townshend actually wishes for rock to live on, “be it dead or alive,” turning the Juniors’ boast into a posthumous wish. As for Neil Young’s song, it was famously referenced in Kurt Cobain’s suicide note in 1994. But that doesn’t change the fact that its contemporary references are to a freshly dead Elvis Presley and to Johnny Rotten, who gleefully danced on the grave he personally dug for the rock ’n’ roll he never much liked to begin with.

This could’ve been a piece about how rock actually is dead, but we’re not really interested in stating the obvious. And while it may be interesting to discuss the actual time of death—Cobain pulling the trigger, for example, or the day the members of American Authors met for the first time—there’s little to be gained by that kind of forensic work. What I’m most interested in is what happens now, when there’s no loud, primitive, punk howl being unleashed against a government that, more than any other, requires that kind of rebellious voice.

I’ll reduce this to the personal. In my lifetime, when the government has been run by truly abhorrent people, there was rock ’n’ roll to help get you through it. It wasn’t just an app on your smartphone, it was a life-giving force. If that sounds melodramatic, then you’re welcome to go fuck yourself. If music never meant that much to you, then you’re part of the problem that needs to be addressed. Of course, such a person isn’t likely to be reading MAGNET anyway.

Rock ’n’ roll emerged in the 1950s, when the shorthand version of history says America was an idyllic place enjoying post-World War II peace and prosperity. This is, of course, the very sort of bullshit that leads people to vote for a clown promising to “Make America Great Again,” as it was during this imagined golden age. The ’50s were the last decade before the Civil Rights movement and the feminist movement began making progress. It was also a decade lived under the constant, corrosive fear that nuclear war could happen at any time.

Those old black-and-white images of school kids scrambling to get under their desks during a nuclear war drill may seem quaint. Try to imagine the terror those exercises instilled in the hearts and minds of every one of those kids. That terror, handed down from the highest reaches of government, was the catalyst for the earliest rock ’n’ roll. That music represented a shout of freedom from the young people coming of age in those twisted, repressive times.

Way too much has been said and written about the role music played through the turbulent 1960s, but that doesn’t make it any less true. Bob Dylan didn’t win the Nobel Prize for literature for “Christmas In The Heart,” believe you me. With the government drafting kids and shipping them to Vietnam and spraying fire hoses at Civil Rights marchers, music was there to express anger or provide relief.

The ’70s gave us Nixon, Watergate, gas lines and “a national malaise.” The response was punk rock and disco, the angry yin and escapist yang of the times. The ’80s gave us Reagan. The response was U2, R.E.M., “Born In The USA,” Public Enemy, Prince and the beginning of alternative rock.

By 2001, George Bush became president and terrorists attacked the United States. Artists like Bruce Springsteen and Wilco were still there to make music that resonated, but there wasn’t all that much of a response to what was going on. The Iraq War was conducted without a draft, insulating most Americans from the personal involvement that might’ve triggered a Vietnam-like protest movement.

Maybe that’s why there was little music made that might’ve motivated such a movement. You can debate cause and effect here, but the simple truth is that rock ’n’ roll largely hasn’t been a factor for the past decade or more. That wasn’t much of a loss during the Obama era, when rational humans understood that their government was in relatively good hands.

(I’m well aware of the right-wing fantasy bubble, in which Obama was the devil and everything he did was an affront to the American way. I’m also aware that the people living in that bubble would not have been attending rock concerts anyway. It’s all they can do to ignore the occasional leftish comment from Springsteen, an artist they’ve hilariously misunderstood throughout their entire pathetic lives.)

The bottom line: We let that muscle—the one that raises that punk-rock fist—atrophy, and now we’re knee-deep in an era that desperately needs it. The next four years are going to be bad enough without a decent soundtrack.