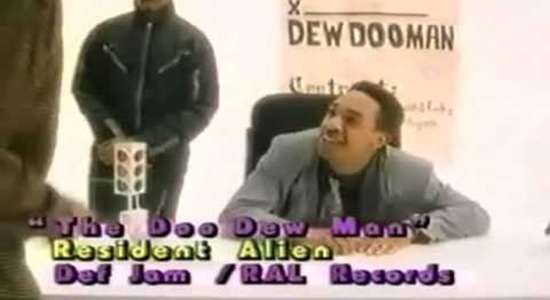 Morrow: Sometime in the ‘90s I became the proud owner of a promotional one-song cassette for a rap group called Resident Alien. The song “Ooh The Dew Doo Man” was an instant gonzo classic. It reminded me of TMBG, Todd Rundgren’s goofier wizard moments and De la Soul—but really, it was its own thing. I eagerly awaited an album that never came. Some sleuthing uncovered the fact that Prince Paul was involved. Many years later I got to have a meeting with him regarding something to do with the TV show Adult Swim. It’s all a little fuzzy now, but I asked him about Resident Alien and he told me there was whole album that never came out because a record deal had gone south. He kindly mailed me a CD-R of the album because I was so enthusiastic. So I was surprised to find this video on YouTube. “The Dew Doo Man” lives!