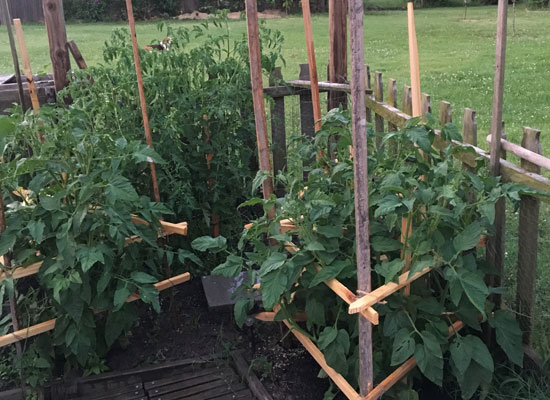 Thebeau: I’ve been gardening for several years. My goal has never been to sustain myself or my family. My garden exists so that I can eat stuff I like that I can’t get at the grocery store. I’m not an organic gardener, though I do limit chemical use to Miracle-Gro and a fungicide for the fungus that has attacked my transplants the past couple years. I buy heirloom seeds from Baker Creek, in part because I love getting the catalog in the mail every year in January and leafing (ahem) through its gorgeous pages (garden porn). I like to choose what vegetables to grow based on the descriptions in the catalog and occasionally by other gardeners’ online reviews. The more interesting the description the more likely I am to want to try it.

Today’s vegetable is the Brandywine tomato, chosen partially because of the product description but also due to it having too booze words in the name. “Brandy” and “wine”? Sign me up. Also, if you like to sing to your plants (and who doesn’t?), you could use the melody of “Brandy, You’re A Fine Girl” swapping in “Brandywine” as much as possible. I’m not saying I do this, but I’m not saying I don’t do this, either. Anyway, I grew these last year and they were the biggest, meatiest, best-tasting tomatoes I think I’ve ever grown. I don’t know if it’s because I didn’t water them as much as I should or if it’s just a normal thing for this variety, but they were pretty ugly to look at. They had dry cracks up near the stem. But, on the inside is what counts and the Brandywines have it where it counts. They had almost no empty space inside them. They were so thick they were almost too juicy for use on BLTs. They were best sliced up into wedges with just a touch of salt.

The first thing people notice about the Brandwine is that it has leaves that look more like the leaves on a potato plant than a tomato. These plants are hardy and aggressive growers that quickly become too large for the standard tomato cage. Last year, I used wire fence cages that were too constrictive. I think we would have had even more fruit with less constricted cages. So, this year, I’m trying my hand at building custom lattice around the Brandywines. Being still early summer, there aren’t any tomatoes on the vines, yet.  But, all the little yellow flowers will hopefully eventually be hefty one-to-two-pound pink tomatoes. I’ve learned to use words like “hopefully” and “eventually” because when it comes down to it, Mother Nature decides what we’re going to get. In fact, we just had a nasty thunderstorm this past Saturday night that did its best to knock everything down.