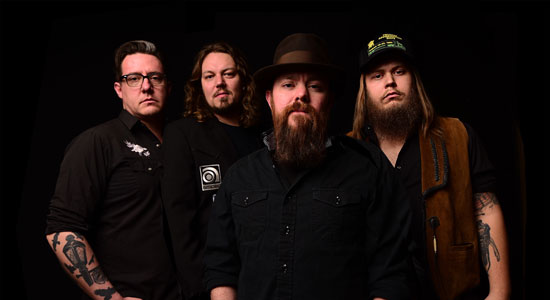 Now that Chris Stapleton and Sturgill Simpson have rendered outlaw country palatable for indie hipsters and CMT viewers alike, perhaps life will be a bit easier for an unwieldy upstart outfit like the Steel Woods. Gritty in their execution but not averse to a little studio refinement, the Nashville quartet may just be OC’s most authentic answer to Lynyrd Skynyrd—Southern-rocking old souls with enough savvy to take what they need from Music City machinery and escape relatively unscathed.

“I feel at home in Nashville,” says band cofounder Wes Bayliss. “There are all types of people and all types of music. It’s become a real mixed bag.”

Bayliss was in grade school when he started playing harmonica in his family’s gospel group. From there, he moved on to piano, bass and drums. Two years ago, he ran into Cope—an accomplished songwriter, producer and guitarist—at a gig in Nashville, and the two initially bonded over a shared love of fishing. “I wish there was a great, interesting story, but we really just had a lot of mutual musician friends,” says Bayliss.

Save for a few covers—including a taut rendition of Black Sabbath’s “Hole In The Sky”—Straw In The Wind is an impressive collection of originals that documents the first gasp of a creative partnership with some serious staying power. Given the album’s fixation on keeping the faith despite the reality that everything that can go wrong will go wrong, it’s obvious that Bayliss and Cope’s narrative sensibilities were shaped by their Bible Belt upbringings and a genuine empathy for those weathering the life-altering consequences of their own mistakes. “Forgiveness, redemption, justice—they’re all the things you go through in life,” says Cope. “It’s stuff everyone can relate to.”