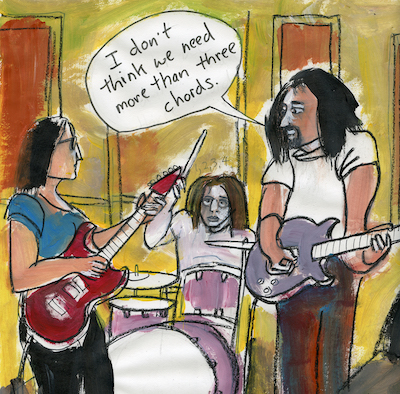 Every Saturday, we’ll be posting a new illustration by David Lester. The Mecca Normal guitarist is visually documenting people, places and events from his band’s 33-year run, with text by vocalist Jean Smith.

Excerpt from my YA novel-in-progress from 17-year-old drummer Curt Frost’s perspective:

Chapter 25
Some kids just want to be old enough to buy booze. Me? I just want to be in a band.
Leaving Carol and Dorkface’s house was weird. So much happened there. It feels like we were there a week, not just overnight. It seemed OK to hug Carol goodbye, but then I went and hugged Dorkface and he gave me a couple of solid thumps on the back that felt like he thought he was someone more important to me than just an old guy whose house we crashed at. When he let me go, he actually looked a little choked up. Carol was laughing and babbling with Allison and Hannah. Nate was already in the driver’s seat of the van. Static was standing on the sidewalk beside the rental car with her arms folded, waiting. And somehow I got sucked into a weird emotional space that Dorkface was generating. I almost thought he was gonna say he was quitting his job at Microsoft to come with us.

What’s even weirder is that we’ve been on the road about an hour and all that intensity—Lizzy and the booze, Roland turning our T-shirts pink, Carol offering Isabella a job, Lizzy falling down the stairs—seems like a month ago. It’s funny, though; Static telling me I should be tour manager seems like it was five minutes ago.