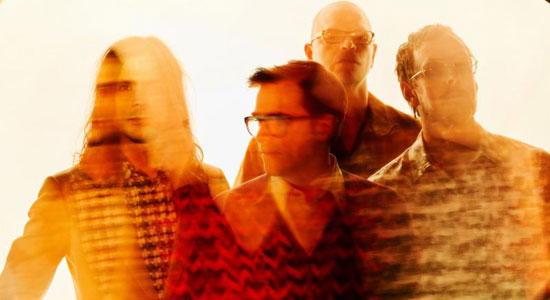 On October 27, Weezer will release the follow-up to last year’s Weezer (a.k.a. The White Album), Pacific Daydream, via Crush Music/Atlantic; Rivers and Co.’s 11th album was produced by Butch Walker … Carry Fire is the latest from Robert Plant, and it’s out courtesy of Nonesuch/Warner Bros. on October 13 … On the band’s West Coast tour supporting last year’s The Catastrophist, Tortoise was joined by photographer Andrew Paynter; the result is The Catastrophist Tour Book (Thrill Jockey), out September 22 and featuring unreleased live recordings from the tour and a CD of The Catastrophist with exclusive artwork … Slow Magic‘s third album, Float, is out October 6 via Downtown/Interscope … Lucinda Williams‘ This Sweet Old World is a re-recording of 1992’s Sweet Old World, out September 29 on Highway 20/Thirty Tigers … Tommy: Live At The Royal Albert Hall captures the Who‘s first-ever live performance of Tommy in its entirety from April and is available October 13 from Eagle Rock on DVD, Blu-ray, two CDs or three LPs … The Dusk In Us, Converge‘s first album in five years, is out November 3 via Epitaph/Deathwish …Radiohead’s Philip Selway did the soundtrack to the Polly Steele film Let Me Go, out October 27 on Bella Union … Madonna: Rebel Heart Tour is a DVD, Blu-ray or double-CD concert film from Madonna’s Rebel Heart Tour, out September 15 via Eagle Vision … The long-overdue official reissue of MAGNET fave Pearls Before Swine‘s One Nation Underground debut (for it’s 50th anniversary, no less) is out courtesy of Drag City on October 20 … On October 13, Khannibalism/Ernest Jenning will issue Murder Burgers, the debut solo album from King Khan (Shrines, BBQ Show), which features the Gris Gris as his backing band … Anti-Flag‘s latest album, American Fall, will be released November 3 by Spinefarm … Racquet Club is a new quartet featuring members of Knapsack, the Jealous Sound and Samiam; the band’s self-titled debut is out September 29 via Rise … Members of Chastity Belt, Tacocat, Childbirth and Lisa Prank have gotten together to form Who Is She?;  debut LP Seattle Gossip is out October 6 via Father/Daughter … On October 27, ATO will issue Lee Ann Womack‘s The Lonely, The Lonesome & The Gone … On The Way Downtown: Recorded Live On FolkScene is a live recording of two radio performance from two decades ago by Peter Case (Plimsouls, Nerves), out October 27 on Omnivore … Kaki King Live At Berklee is a live album by Kaki King recorded this year at Berklee College Of Music to be issued September 22 by BirnCORE (the Berklee Internet Radio Network’s label) … Before John and Tom Fogerty, Stu Cook and Doug Clifford were Creedence Clearwater Revival they were the Golliwogs, and on September 29, Craft/Concord will issue Fight Fire: The Complete Recordings 1964-1967 … Whitesnake‘s self-titled 1987 album gets the 30th anniversary treatment October 6 from Rhino with a four-CD/one-DVD set … Dolly Parton‘s first children’s album, I Believe In You, is out October 13 via Dolly/RCA Nashville … On October 6, Real Gone Music is issuing Carol Burnett: Sings, which features Carol Burnett singing pop and show tunes, recorded in 1967 … Christmas Is Coming Early Corner: 98°‘s Let It Snow is out October 13 via UMe, while Herb Alpert‘s The Christmas Wish can stuff your stocking starting September 29.