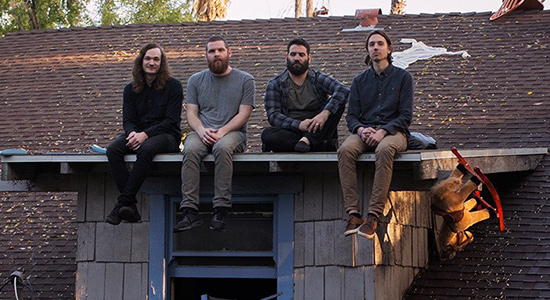 Manchester Orchestra has been one of rock’s most consistent rock bands since it burst onto the scene with 2006’s I’m Like A Virgin Losing A Child, but that hasn’t stopped the quartet from shifting gears over the years. 2009’s Mean Everything To Nothing is a grizzled and remarkably loud document compared to 2011 follow-up Simple Math, a restrained and calculated record that benefits from a glistening production job. 2014’s Cope turned the volume back up, opting for solid, no-frills rock ‘n’ roll and stripping away Simple Math’s orchestral arrangements and nuanced sprawls. All of these different faces of Manchester Orchestra wonderfully showcase its many talents, but none of these records encapsulated them all until now.

A Black Mile To The Surface compiles and streamlines everything that this band does well. Combining the ear texture and atmosphere that Manchester Orchestra developed on Simple Math and Hope (the acoustic Cope alternative) with the sentimental, impassioned rock of its first two records, the band delivers a brilliant and assured version of itself. The lullaby-esque “The Maze” swoops in with a dramatic beauty, mixing gorgeous harmonies with tender, sweet lyrics; it shows off the personal, more matter-of-fact side of a record that spends much of its time telling stories. A Black Mile To The Surface started off as entirely conceptual, telling the story of coal miners across generations. As a result, we’re left with glimpses of this world, and these detailed vignettes make for some of the best moments of the band’s career. “Lead, SD” is primary evidence of this, a nervy, anxious rock song built on loud, whirring synthesizers and frantically spilled-out descriptions of frigid South Dakota, impending parenthood and a vaguely climactic moment in a grocery produce aisle. More level-headed sister track “The Grocery” ebbs and flows between layers, telling of violence over a twinkling acoustic guitar and doubting its narrator in a show-stopping burst of energy (“You believe it or you don’t”).

These concept leftovers are all deeply puzzling but hair-raisingly performed, with no fear of veering into huge cinematic territories. Finale “The Silence” is vast and heavy, building up to a full-throated climax in which Andy Hull struggles to get above the chaos: “Let me hold you as close as a memory.” Though its subjects come from many different places and perspectives, A Black Mile To The Surface holds together as a whole as a deeply felt and meticulously put-together rock meditation on memory, tragedy and family.