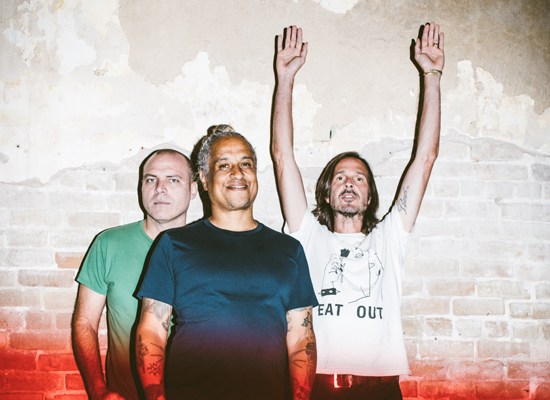 A number of books telling the story of the early days and origins of New York hardcore have been penned over the last handful of years, and in addition to the venues that served as meeting places for the scene and its denizens, places like Washington Square Park have also been described as playing a significant role in the NYHC story.

The 9.7-acre Manhattan park has been cleaned up and transformed as per the gentrification that began with Rudolph Giuliani’s time in office, but back in the ’80s, it, along with other outdoor city spots like Tompkins Square Park and Roosevelt Park, was a hangout and meeting place for addicts, the homeless, prostitutes, pushers and miscreants of all descriptions as well as artists, eccentrics and local hardcore punks. So, a sense of surprised irony generates a wry grin on our face when Quicksand bassist Sergio Vega informs us he’s hanging out in Washington Square Park when MAGNET calls.

That irony is not lost on Vega. While chatting about Interiors (Epitaph), his reformed post-core/alt-metal group’s first album in nearly 23 years, he recognizes he’s frequenting the same locale in which he and his bandmates—guitarist/vocalist Walter Schreifels, drummer Alan Cage and guitarist Tom Capone (currently on hiatus due to personal issues)—spent chunks of their youth, between gigs and rehearsals for pre-Quicksand outfits like Gorilla Biscuits, Youth Of Today, Beyond, Bold, Burn, Collapse and Absolution. But old habits, as they say, die hard.

“When Quicksand was originally around, I used to stress out about its fragility,” he says about what makes QS2017 different. “The band was intense, good and powerful, but at any moment it felt like it wouldn’t exist. I think I took things for granted, coming from the hardcore scene where things would fall apart and reemerge very quickly. On the other hand, there was always chemistry, and all we had to do was get together to do something good. These days, things are way more chilled out.”

“We navigated situations that I could’ve seen us fighting about,” says Schreifels. “That just didn’t happen on this. We had disagreements, but it was never hostile or contentious. It was like total discussion, which is awesome, and that’s how you get through things.”

Quicksand actually reunited once before, in 1997, but split two years later due to outside and business pressures fanning the flames of internal tension. This time around, the reunion was casual. So much so that if you weren’t paying attention—or if you were paying more attention to the members’ other projects, including Rival Schools (Schreifels), Instruction (Capone), Enemy and 108 (Cage) and Deftones (Vega)—you might not have even realized the quartet originally got back together five years ago.

“Basically, around the time Deftones were about to record (2012’s) Koi No Yokan, Dine Alone wanted to license and reissue (first Quicksand album) Slip,” says Vega. “The Quicksand guys have always maintained a friendship, and Walter and I got talking and batted around the idea of playing a couple shows around the licensing. Not so much because of the licensing but because that was where our heads were at, and it seemed like a good pretext to do it. Our friends and people around us were super pumped on the idea of the band existing again, so we reached out to Alan and Tom and had a lot of fun with it.”

“We’re lucky in that we still have a rapport musically and personally,” says Schreifels. “Both of those guys are super unique and distinct players, and it brings my game up.”

“There was no pressure, no social-media presence, no trying to find funding,” says Vega. “We just did it when we could do it.”

Since then, Quicksand toured occasionally here and overseas without definitive plans to record an album until realizing it had enough material. Things were, again, very casual, which allowed the music on Interiors to blossom with vocal-driven melodies, hard alt-’90s guitar and as much proggy/space rock former NYHC kids can scrape off the streets. It took three years of work so insular that the band’s management eventually stopped asking what was up.

But, as Vega puts it, “That approach allowed this to happen. Our nature as players is that we always jam, noodle and come up with new ideas, so that was natural when we got together, but we never decided we were making a record. We’d jam whenever we could, but it was never like, ‘We’re writing!’ After a certain point, we thought about how long we’d been messing around and what we had to show for it. We documented it all and discovered we had a hard drive full of stuff and we’d done a lot more work than we thought. Then, we were able to go back, see what worked and it was like, ‘Wow, we actually have a record!’ This all went so backward.”

“Going into it, I thought in some ways that we have to try to catch up with our style from 27 years ago,” says Schreifels. “But what ended up happening was it just kind of came out naturally. We didn’t really have to do anything.”