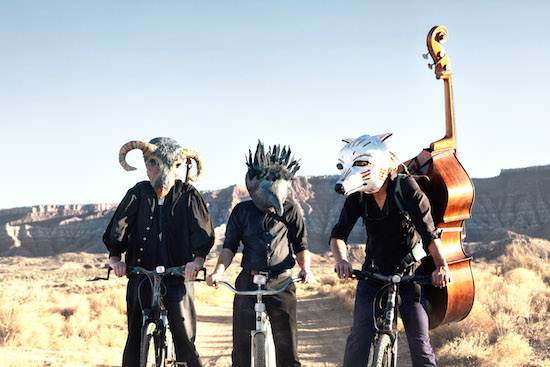 On February 23, 3hattrio will issue Lord Of The Desert, a 13-track album of what the Utah trio has come to call “American desert music.” Well, they hit the nail right on the head with that description, a Southwest-inspired fusion of folk, psych and chamber-esque music that’s both timeless and timely. Lord Of The Desert is the third LP from the band—seasoned vets Hal Cannon (banjo) and Greg Istock (bass) and youngster Eli Wrankle (violin)—and its noir-ish sounds are made even more trancey and otherworldy with the addition of some adventurous Autotuned vocals. We’re proud to premiere album track “War” today on magnetmagazine.com. Says the somewhat-mysterious Istock of the track, “Is it inevitable that the human species talk about, think about or prepare for and engage in war.” Well, we’ll pretend to understand exactly what he’s talking about if he and his bandmates keep making music this fascinatingly original. Download and/or stream “War” below, and catch 3hattrio live around the Southwest next month.