Maybe it’s just us, but when we think of musicians who are also writers, filmmakers, TV personalities, producers, mental-health advocates, LGBT activists and in recovery from drug/alcohol addiction, Logan Lynn is one of the first people to come to mind. Anyway, Lynn has a new LP coming out this fall called My Movie Star, and much like its creator, it’s many different things at once. The multimedia My Movie Star is part standard album, part covers/remix record and part short film. What makes things even more interesting is the involvement of another man who wears many hats: Jay Mohr. The actor, comedian, producer and Mohr Stories podcaster became indispensable in the making of My Movie Star.

“I met Jay a while back when I did his show, and we both felt this instant connection to one another—like we had been married for years or something,” laughs Lynn. “We started going on adventures together from there and have been pretty inseparable ever since. I fucking love that guy and have never had anyone believe in me the way he does. That belief morphed into an official role at some point in 2016, and his honest feedback became producer notes.”

The 10 songs on My Movie Star were penned by Lynn on the piano in his Portland, Ore., loft, and he streamed these initial writing sessions live via social media. He soon took the clips offline and sent them to Mohr, who had more than his fair share of insightful input to provide Lynn.

“He saw something in me and my songs that had been there all along, but for whatever reason had not been brought out,” says Lynn. “It would show up in select moments on my records since 1998—that quiet, still place this new album lives in—but he wanted me to stay there, to write from that place, and to be brave about letting these stories come out as they are, no bells and whistles. I trusted him and, well, here we are.”

This unlikely dynamic duo picked up some friends to come along for the ride, including Portland piano prince GLASYS as collaborator, as well as ’80s popster Tiffany, the Dandy Warhols, DoublePlusGood, Jarryd James, Rian Lewis and others who “reinterpret” all 10 of My Movie Star‘s tracks.

Lynn and Mohr also produced a 12-minute film for My Movie Star, which was written and directed by Portland-based Kevin Forrest, who’s worked with the likes of Aesop Rock and KMFDM. The short features three songs from the album: “Big City Now,” “Like Before” and the title track.

Despite all the extras that accompany the LP proper and its interesting backstory, what makes My Movie Star special is Lynn’s stripped-down, intimate approach to these very personal songs, two of which were co-written by Mohr. “This record was built on that deep familial love we have for each other and that trust,” says Lynn of his new partner in art. “I think that really comes through in the songs.”

We are proud to premiere the short film for My Movie Star today on magnetmagazine.com. Watch it now. 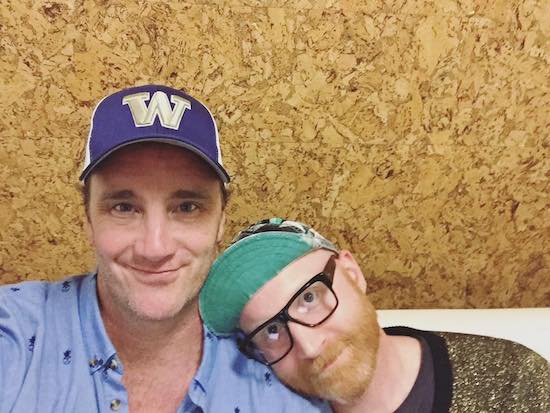