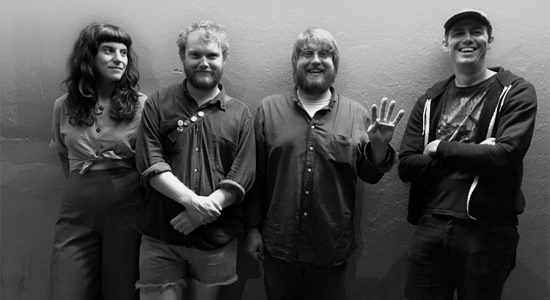 Sam Cook-Parrott of DIY rock outfit Radiator Hospital claims that every friend he’s ever made was through playing music. “The first band I ever played in was a duo with my only friend at the time,” he says. “That’s how we learned to make more friends.”

Cook-Parrott has never had any problems in this department. Radiator Hospital had amassed nine releases (one LP, several singles and EPs) when it left Grand Rapids, Mich., for Philadelphia in 2012; its discography has since doubled. This October, the band released Play The Songs You Like (Salinas), billed as its first outing in three years. Technically that’s true, as far as albums go. But between downbeat folk offerings (Cook-Parrott’s Everly Brothers-esque Afterglows, a project with friend Mikey Cantor of the Goodbye Party), split singles and EPs (with Great Thunder and Martha) and other side jaunts (Cook-Parrott’s work with Allison Crutchfield, twin sister of this issue’s cover star; guitarist Cynthia Schemmer’s excellent record under the name Swanning), these players have never been far from visibility.

“Torch Song in 2014 was the last record that all four of us played on,” says Cook-Parrott, referring to the lineup of Schemmer, drummer Jeff Bolt and bassist Jon Rybicki. “To me, that’s what a Radiator Hospital record is.”

Other things a Radiator Hospital record might be? Fun, catchy and infectious. Lean and mean, with songs rarely exceeding three minutes. Riffs and licks rooted in timeless rock ’n’ roll and American songwriting (Ronettes, Brian Wilson) but amplified with carefree basement-show energy. Songs of innocence, songs of love and heartache—like speedy Play The Songs You Like jammers “Love Story” and “Out Of Mind.” And recently, an expansive sonic palette: On the new album, recorded in Philly with Jeff Zeigler, the band dabbles in stirring piano meditations (“Also Ran”) and buoyant indie-pop jams in the vein of Talulah Gosh (the Schemmer-led “Half Empty”).

Schemmer came to the band in 2012 with experience in New York’s Very Okay, but it had been a long time since she’d played her own music. In 2015, she wrote and recorded Swanning’s Drawing Down The Moon to channel decade-old grief over the loss of her mother.

“I needed to get out of my comfort zone and start writing my own songs again,” she says. “And because I did that, I pushed myself to write more guitar parts for this Radiator Hospital record. It gave me more confidence.”

For Schemmer and Cook-Parrott alike, their time away from Radiator Hospital was channeled right back into the band, making Play The Songs You Like a culmination of experience in the most revved-up way imaginable.