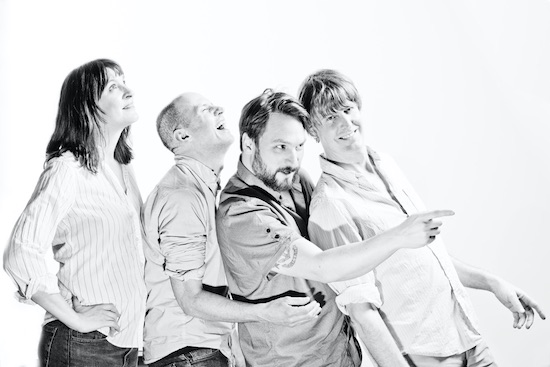 The latest from Stephen Malkmus & The Jicks, Sparkle Hard, is out May 18 on Matador. It’s hard to believe the band is already on album number seven and has been together almost twice as long as Pavement was. The 11-track LP was produced by Chris Funk (Decemberists) and features Kim Gordon on one track … We guess “2” is the magic number when it comes to Garbage in 2018: The band’s 2nd album, Version 2.0, celebrates its 20th anniversary on June 22 with a reissue courtesy of 2 labels (Stunvolume and PIAS); it comes in 2 formats—vinyl (three-LP deluxe and 2-LP standard) and CD (2-CD deluxe with 10 bonus tracks and single-CD standard). Buy them all and give 2 your friends … Three classic Posies albums get the deluxe-reissue treatment via Omnivore this year (Dear 23, June 15; Frosting On The Beater, August 3; and Amazing Disgrace, October 28); all three come as two-CD and two-LP sets with lots of bonus material … On May 18, MPL/Capitol will reissue four Paul McCartney titles as single CDs and LPs: 2013’s New, 2005’s Chaos And Creation In The Backyard, 1978’s Wings Greatest and 1977’s Thrillington … Holly Golightly & The Brokeoffs are back May 4 with 10th album Clippety Clop (Transdreamer/The Orchard/Sony) … After 17 years together, Frog Eyes will release their final album, Violet Psalms, on May 18 via Paper Bag … Looper (a.k.a. Belle And Sebastian co-founder Stuart David and wife Karn) just issued the 10-song, acoustic Quiet & Small (Mute) … Jethro Tull turns 50 this year, and to celebrate Ian Anderson and Co. have two new career-spanning collections coming out: 50 For 50 (a three-disc, 50-song set featuring tracks from all 21 studio LPs) and 50th Anniversary Hits (a single-disc, 15-song comp); both come May 25 courtesy of Parlophone … On April 20, Blue Note will issue Live by Terence Blanchard Featuring The E-Collective, a seven-track album (culled from three concerts) that addresses this country’s gun-violence epidemic … Are YOU One of Jay’s Kids? is a two-CD, 44-track set compiling all of Screamin’ Jay Hawkins‘ ’90s recordings for the Bizarre label, including five unreleased bonus track; it’s out May 18 on Bizarre … Technicolor Paradise: Rhum Rhapsodies & Other Exotic Delights is a compilation out May 25 via the Numero Group that features a treasure trove of exotica rarities from the ’50s and ’60s (54 tracks on one CD; 48 over three LPs)—mai-tais and daiquiris not included … Omnivore will release Buck Owens And The Buckaroos’ The Complete Capitol Singles: 1967–1970 on May 11, featuring both sides of all 18 singles that Buck Owens And The Buckaroos released during that four-year span … Plain Spoken: From The Chicago Theatre (Eagle Rock) finds Rock And Roll Hall Of Famer John Mellencamp providing voice-overs atop live-performance footage of his band performing highlights from his 40-year career; it’s available on DVD/CD and Blu-ray/CD, both of which offer the option of watching a “non-commentary” version of the concert … Rachel Grimes (leader of MAGNET’s favorite neo-classical/avant-chamber/pre-rock outfit Rachel’s) has scored upcoming documentary The Doctor from India; the soundtrack is out May 18 on Mossgrove Music … You know a movie has some cool tunes when its soundtrack gets a sequel; the two-CD and double-LP Baby Driver Volume 2: The Score For A Score is out April 13 on 30th Century/Columbia and features the unreleased score (by Oscar winner Steven Price) and dialogue excerpts, plus more songs from the film, exclusive tracks and remixes by Danger Mouse, Run The Jewels, R.E.M., Ennio Morricone, Boards Of Canada, the Steve Miller Band, Kid Koala and more … Jesus Christ Superstar Live In Concert: Original Soundtrack Of The NBC Television Event is just that, to be recorded and aired live tonight (staged at Brooklyn’s Marcy Armory and starring John Legend, Sara Bareilles, Alice Cooper and Brandon Victor Dixon) and released digitally on April 6 and on CD on April 20 (Christ, we probably shouldn’t make our usual 420 joke) via Masterworks Broadway/Sony Masterworks … Speaking of live music on the stage from TV and now on tape (or something like that): Nashville In Concert At The Royal Albert Hall (Eagle Rock, April 27) is a 29-track DVD of songs recorded live last year by Charles Esten, Clare Bowen, Sam Palladio, Jonathan Jackson and Chris Carmack from the cast of hit TV show Nashville, plus two bonus featurettes … James Szalapski’s Heartworn Highways is a raw-document documentary on a handful of musicians—like Townes Van Zandt, Guy Clark, Rodney Crowell and Steve Earle—who wiped the slick off of country music and took it back to its early 20th-century folk and blues roots, while Heartworn Highways Revisited extends the story to include the next generation of outlaws, such as John McCauley, Justin Townes Earle, Shovels & Rope and Langhorne Slim; both films are available April 6 on DVD via MVD.