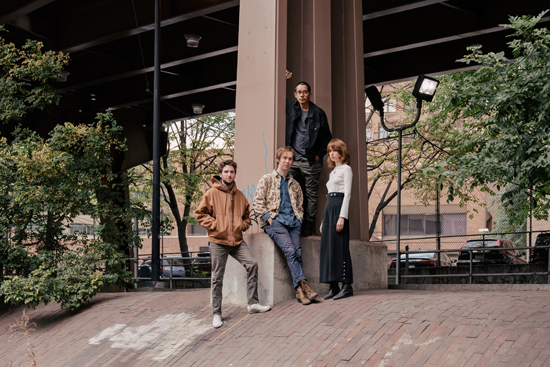 Shane Butler has always been interested in exploring the outer limits of sound. The arrangements he crafted with his band Quilt often took the music to unexpected places. When he began collaborating with fellow songwriter/guitarist Caity Shaffer as Olden Yolk, the duo decided to give free rein to their creative impulses, crafting sounds that were even deeper, wider and more unusual.

“We definitely spend just as much time listening to experimental, instrumental and textural music as we do to more song-based music,” says Butler. “It’s our goal to make something that’s expansive on a sonic front, something you can go back into and listen to many times and be able to find a new sound or texture on each listening.”

Olden Yolk’s self-titled debut (on Trouble In Mind) meets that goal with songs that explore the often-hidden nuances of everyday emotional experiences. The poetic lyrics are accompanied by dissonant, ambient sounds that complement the songs without breaking the intimate mood they’re creating.

“They’re not completely narrative or written linearly,” says Shaffer. “They’re not ‘come here and let me tell you a story’ songs in the traditional sense. I would hope for them to be open to interpretation, although many of the songs do reference specific situations in our lives.”

Shaffer and Butler share lead-vocal duties, using lush harmonic overtones that blend into a single presence. On songs like “Cut To The Quick” and “Takes One To Know One,” they break into rhythmic spoken-word interludes that add another dimension to the tunes.

“Poetry is an important practice for both of us,” says Shaffer. “We’ve both kept poetry journals our whole lives. I’ve read and performed poetry a handful of times this past year. Poetry has had a significant impact on both of our lives.”

UNDER THE INFLUENCE WITH SHANE BUTLER AND CAITY SHAFFER

Ka Baird’s Performances
“We’ve seen Ka Baird in different iterations through the year, and it has been incredibly inspiring. Ka’s mix of acoustic and electronic instruments, vocal experimentation and visceral performance is truly original.”

Truth Or Consequences, N.M.
“Our minds roam back to the energy in the town, the hot springs and the surrounding landscapes. Especially when it’s nine degrees in NYC and snow-filled, with trash lining the streets.”

Death Simulation Workshop
“In order to live, you have to die. So, try meditating on the things you’ll inevitably leave behind. After we did, we opened up to a new form of empathy and understanding of the death process.”