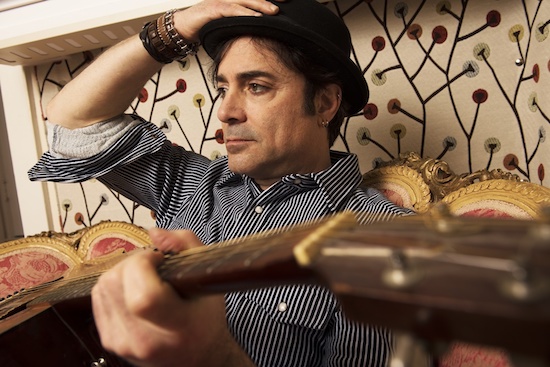 Scott Mickelson has just returned with sophomore album A Wondrous Life. While he might be a newcomer to you, Mickelson is actually a grizzled vet, having fronted Fat Opie (who once shared a manager with Neil Young and Tom Petty) throughout the ’90s after he had already spent close to a decade in the music biz. He’s been a fine artist, a children’s book writer and part of Francis Ford Coppola’s film-production team. He also battled clinical depression and illness for many years. A noted record engineer, Mickelson worked on A Wondrous Life mostly alone while in the studio between production gigs. All this life experience and technical prowess provided Mickelson with the tools he needed to beat the sophomore solo slump. They also made him a prime candidate for us to ask to make MAGNET a mix tape. And so he did. Though it’s short (we’ll call it a mix EP), it’s also really sweet. Check it out now.

Neil Young “Only Love Can Break Your Heart”
After The Gold Rush was the very first record I ever bought. I remember going to Midland Records in Massachusetts with $10 and buying it. This record had a huge impact on me as I was very young and already writing songs. This track is a favorite. I basically wanted to be Neil Young when I grew up. In later years, I was managed by Elliot Roberts, who is still Neil Young’s manager.

Radiohead “Airbag”
My former band Fat Opie was in the middle of recording our Airstream record when OK Computer came out. I think we and the rest of the world were pretty sure Radiohead had taken rock music to a new place both musically and technically. Aspects of their record range from lo-fi to pushing compression and EQ to places where they may not have been “acceptable” before. The first 45 seconds of “Airbag” changed every thing for me. The distorted drums, guitar tone and especially when and how the bass enters the song completely changed how I approach arrangement and production to this day. We tried to model the “sound” of our Airstream record after the sound of OK Computer. OK said to me, “Anything goes in rock music”—again!

Sly & The Family Stone “Family Affair”
People find it hard to believe that Sly & The Family Stone are a huge influence on me. Musically, you’d be hard-pressed to hear the connection, but he wrote great songs. He knew how to write hit songs that could incorporate the issues of his time. What people do not give him credit for is the fact that his production and arrangements were groundbreaking and, in my mind, opened the door for what is considered modern R&B. I think of Sly as the connection from James Brown to Prince, and I personally think he was the biggest innovator of the three. I chose “Family Affair” because it could be one of the best vocal performance ever recorded. It’s dry, in your face and immaculate.

Tom Waits “Kentucky Avenue”
“I’ll take the spokes from your wheelchair.” I believe that Tom Waits is one of the all-time great American songwriters and underrated. It’s hard to pick a single track. He can go anywhere, anytime within his music and still come back home and write a song that breaks your heart. In “Kentucky Avenue” when I realized he’s speaking with someone in a wheelchair late in the song, it broke my heart in all the best ways. In fact, I “borrowed” this idea for that last verses of my song “10 Ton Heavy Thing.”

Brian Wilson/Beach Boys “Surf’s Up”
This is my favorite song of all time. I can’t say enough of my feelings for Brian Wilson’s genius. In fact, the last track of my A Wondrous Life record is an instrumental I named “B. Wilson.” It is my favorite track on the record. “Surf’s Up” is a 4:12 masterpiece.