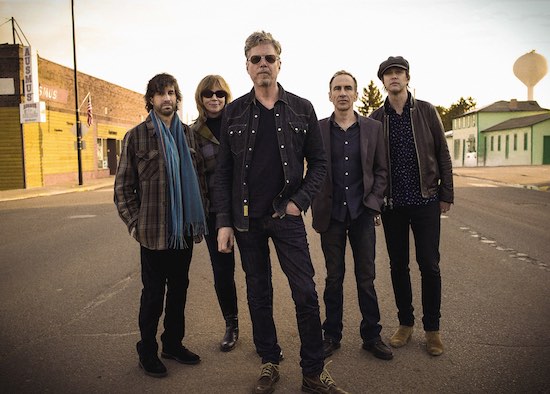 On July 13, Legacy will issue Back Roads And Abandoned Motels, the 10th studio album from the Jayhawks. Gary Louris and Co. must be feeling mighty social these days, as not only has the band backed Kinks legend Ray Davies on his two most recent solo albums (the second, Our Country: Americana Act II, is out June 29) but also collaborated with a number of other musicians for Back Roads And Abandoned Motels. Louris wrote two of the 11 songs on his own, with the other nine being co-written with the likes of Dixie Chicks, Jakob Dylan, Emerson Hart (Tonic), Ari Hest, Scott Thomas and Carrie Rodriguez. Catch the Jayhawks on tour in June, July, September and October … The dynamic and dangerous duo of Mark Lanegan & Duke Garwood returns with With Animals (Heavenly) on August 24 … Baby Grand is the fourth album from the Love Language, out via Merge on August 3 … Lenny Kravitz is gonna go your way September 7 with 11th LP Raise Vibration (BMG) … We were gonna applaud Good Charlotte for being the first band to title an album Generation Rx (MDDN/BMG, September 14), but it turns out Louisville outfit the Metroschifter beat them to it by 21 years; kids, trends do repeat themselves every two decades or so … Speaking of decades, it’s only taken Kinky Friedman four of them to make an album of all originals; but now it’s done, called Circus Of Life and out July 3 on Echo Hill … 1/1 is the first soundtrack offering from Liars, out July 20 via Mute and recorded by Angus Andrew and Aaron Hemphill before the latter amicably left the band four years ago; the Jeremy Phillips-directed film is out July 17 … Speaking of film soundtracks: The Lord Of The Rings: The Two Towers: The Complete Recordings (Rhino, July 27) is a five-LP boxed set compiling all the music from the movie; it’s also available as a three-CD/Blu-ray edition … The fine folks at Real Gone Music continue their stellar reissue work with two new titles on July 13; Willie Nelson‘s Things To Remember: The Pamper Demos (28 songs Nelson wrote and recorded in 1960 as a songwriter for hire, including the first recordings of songs such as “Crazy”) and the Statler Brothers‘ Sing The Classics (a previously out-of-print, mail-order-only compilation from the ’90s of the vocal group’s ’40s-’60s hits including “Memories Are Made Of This” and “Goodnight, Sweetheart, Goodnight”) … Hyperactive is a two-CD collection of Thomas Dolby‘s greatest hits, out July 27 as part of BMG’s Masters Collection series … July 27 marks the final batch of A Certain Ratio studio-album reissues from Mute—1982’s Sextet, 1997’s Change The Station and 2008’s Mind Made Up—available on CD and colored vinyl … Speaking of colored vinyl: Capitol/UMe will reissue three Liz Phair titles—1994’s Whip-Smart, 1998’s whitechocolatespaceegg and 2003’s Liz Phair—on LP; only the first two are available on limited-edition colored vinyl, while the standard versions of whitechocolatespaceegg and Liz Phair are double-LP sets.