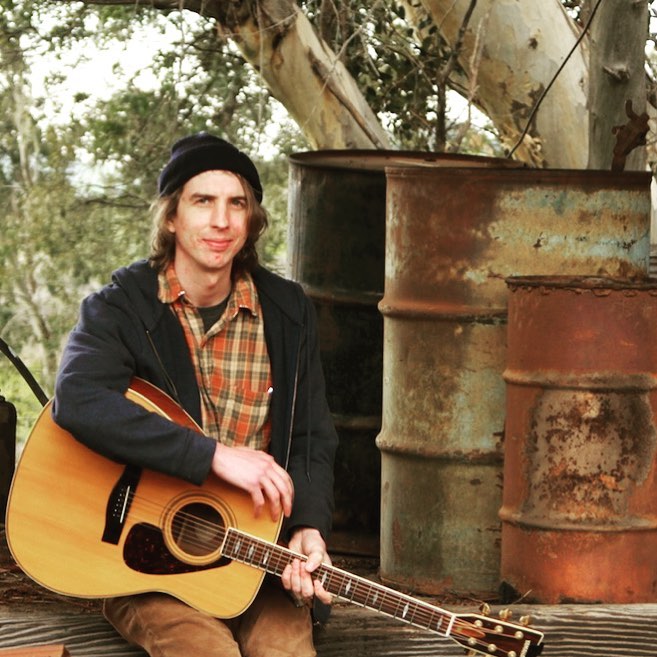 Not only is James Rose a singer, songwriter and multi-instrumentalist, he also lives a pretty unique lifestyle. Rose is constantly searching for the meaning of life and is doing so through both music and travel. Right now, he’s decided to take a breather in L.A., performing and releasing the Lullabies To The Ocean EP. His songs find inspiration from the good stuff and would fit right in on a mix tape alongside former MAGNET covers stars like Elliott Smith, Ty Segall and Kurt Vile. Speaking of mix tapes: To get a good sense of other key influences, check out this excellent “blast from the past” one that Rose made for MAGNET.

John Lennon, “Jealous Guy”
This is the song that pretty much set it all up for me. It is part of my first memory on this planet. Or at least I think it is. I remember taking steps down a winding staircase with colorful murals of important people I had no concept of. The air became more damp the further I went, and this beautiful piano song was playing. I must have been about four years old, and it was during a trip to my mothers hometown of Liverpool. The staircase I was walking down was the replicated version of the original cavern where the Beatles would play. I remember walking through the dank cellar, feeling the cold, stone archways and looking up as it circled over my head. Walking up to the stage alone and being in awe was incredible, and I always feel that when I hear this song. It brings me complete musical satisfaction every time I hear it. It’s just one of the most gut-punching, beautiful and emotional songs ever written in my opinion. I think a lot of people share that same view.

Kinks, “Waterloo Sunset”
Ray Davies is one of my favorite songwriters of all time, and Dave Davies is definitely a favorite guitarist and singer. His guitar work and personal style is incredible. I absolutely love Ray’s dry wit and uniquely British writing style. The band’s focus on the British and European markets (due to the ban placed on them by the AFM) is also fascinating since they were originally inspired by the rhythm ‘n’ blues and music from the United States. “Waterloo Sunset” is such a thought-provoking and heart felt song for me. I was always fascinated with the Kinks music, and Dave’s legendary riffs and leads are just out of this world. The Kinks were vital in my curiosity for music and expanding my musical thought process. I love how Ray conveys emotion, and he’s very word-oriented in his writing. He has a real sense and intelligent aura within his songs filled with philosophical ideas, and I just love that kind of writing. Everything about this song is pure bliss.

Alex Chilton, “The EMI Song (Smile For Me)”
Another musical hero of mine is Alex Chilton. His career is probably the most unique and interesting to me of any musical artist that I listen to. He produced a couple of the Cramps records and was in Panther Burns. I mean, come on! This song is after the Box Tops during a solo phase before putting Big Star together with Chris Bell. He did a lot of mucking about in Ardent Studios and recorded all of these incredible songs that never saw the light of day until recently. He was such a unique individual with an incredible perspective on art and music. This particular song really gets to me. It’s just something about the arrangements and the combination of everything as it builds. How it all comes together toward the end and then drifts out again takes me to such a state of bliss that it’s hard to describe. I guess it’s just the rush that music gives you when something connects with the inner you and creates that intense feeling. The emotional connection that music graces us with is truly amazing. The power of music, new and old, continues to astonish me. Chilton was also a staple of the New Orleans music community and worked odd jobs all around the city. I spent 10 years there and always liked to think about that when I was doing the same thing, cleaning dishes in a Creole/French restaurant. Or maybe as I was sweeping slanted balconies of an old hotel, overlooking Toulouse Street in the French Quarter with a jazz quartet in the courtyard over.

Sparklehorse, “Hammering The Cramps”
There’s such a raw energy to this song, and it really gets me going. I was introduced to Sparklehorse by my good friend who’s been consistently showing me incredible music since fifth grade. I was going through a pretty difficult time, and Sparklehorse just got me through it like a race car with no brakes. Mark Linkous was an incredible visionary, and his sounds captured the sense of despair of certain emotions so well. It’s just very powerful songwriting, and the instrumentation is so unique and interesting. Some of his songs are rocking with an awesome grittiness that was strictly the sound of Sparklehorse. It was some kind of strange cryptic power that overcame the instruments and provided these beautiful songs hiding in the shadows. Truly astounding work. I enjoy driving down some lost highway blasting this one!

Sonic Youth, “Kool Thing”
I’ve recently been putting on a lot of Sonic Youth, and it’s felt so right. It’s been too long since listening, and I have always been such a fan. The same friend I mentioned earlier turned me on to them when we were about 12 or 13, and I haven’t looked back since. I was already a pretty big Nirvana fan at the time, and when I heard Goo and Dirty for the first time, I nearly lost my mind as I passed into some other dimension. I love “Kool Thing” because it’s just such a killer song with a great kick, and apparently it’s about LL Cool J after Kim Gordon interviewed him for Spin. It seems like it was quite a strange and surreal interview! This one is always fun to rock out to. I love the strength in this song. Kim Gordon is a badass!

Neil Young, “Don’t Let It Bring You Down”
This awesome song is littered with a kind of cryptic hope with beautiful imagery painted with surrealism. I have always been a pretty big Neil fan, and my dad was, too. He would play “After The Gold Rush” and “Harvest” pretty heavily when I was growing up. Neil always had that kind of DIY aesthetic and has always been true to the overall feeling of the song. This one rolls along with jagged corners and the sweet smell of jasmine after a summer rain. My favorite time to listen to this is driving down a barren highway in the rain. Such an incredible feeling emits from this song that I just had to include it in my mix.

Zombies, “This Will Be Our Year”
This is such a great song. I love the Zombies so much, with their excellent baroque pop and brilliant songwriting. This is the song I put on to find a new hope in whatever situation may occur. I usually spin this one on New Year’s Eve, and it has such a lovely sense of doe-eyed optimism. This will be our year … finally! It’s been raining for so long, but now I can see the sun opening up through the clouds and this song is on full blast! I was inspired to write more piano-based songs after becoming obsessed with this album. There is something so magical about the production of this album. I believe it’s an Abbey Road record! The lyrics are so sweet and innocent. They nailed the feeling of seeing the light after a period of darkness and to embrace it with love. The Zombies will always be a favorite, and this record is most certainly a comfort record for me.

Stooges, “Gimmie Danger”
I couldn’t make this mix without including some of the Stooges! The sound and rawness this song brings is such an inspiration to my own music that I had to include it. It has such a pretty structure, but the production is such an intense rawness like sand in the eyes. I love that acoustic-guitar riff so much! It has a sense of calmness but is also set on a turbulent sea as your boat is rocking all over the place. It has that sense of danger, and Iggy stated that it’s about the challenge of being with someone with such a raw energy that nothing lacks excitement in the relationship. I love the fact that it has this really nasty acoustic guitar through it. Truly a bad-ass song!

T.Rex, “Cosmic Dancer”
As much as I love Marc Bolan’s electric boogaloo and glam-rocking songs, his quiet and mystical folk-like songs are equally as impressive and tantalizing. “Cosmic Dancer” immerses you in such a unique and surreal world among the stars of the distant galaxies. Bolan was the ultimate cosmic gypsy, and T.Rex was another standard in my family’s musical rotation. Tony Visconti’s string arrangements really made this number twinkle in the distance like a burning star. The lyrics really make me shiver, too, from lines like, “I danced myself into the tomb”—the imagery of that alone is quite a powerful thing. Needless to say, T.Rex always has a home in my record collection. I am also a huge sucker for backward guitar, and it’s all over the place on this number. Gotta love T.Rex!!

Elton John, “Goodbye Yellow Brick Road”
This is hands down one of my favorite songs of all time. I always put this on in times of darkness when I need to feel human again. It is my ultimate comfort song, and I can listen to this on repeat for hours. Elton John is a legend, of course, but his musical songwriting abilities are out of this world! The team dynamic with musician and incredible lyricist Bernie Taupin is quite an eclectic combination and one for the books. I just love the dwindling light of Sunset Blvd. imagery, the nostalgia and bittersweet romance captured in a certain way. This will always be one of those songs that stays by my side in times of darkness.