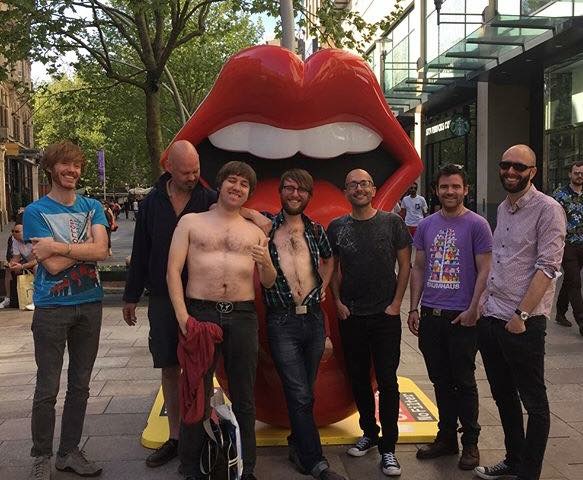 Love: I don’t make my hit albums all by myself, you know. I mean I could, but it’d just take longer and I’d be lonely. I’d like to introduce you to the great bunch of lads that make up my backing band, the Old Romantics (in alphabetical order)  :

Alex plays the trumpet and does occasional backing vocals with a sideline in excellent dancing. He joined us last year after he replied to an ad I put on Gumtree looking for a trumpeter. In real life, he’s a teacher, but we don’t hold that against him.

Daniel plays the guitar and does backing vocals. I first met Daniel in the toilets of the Buffalo Bar (R.I.P.) in 2007 when we shared a mutual drummer, Jonny (R.I.P.). Since then, we’ve been on many adventures mostly involving alcohol. I almost killed him with a wine bottle in Manchester in 2009.

Ian plays the drums. He came to the group via Mark after they’d performed in a covers band at a wedding and we needed a drummer. Thankfully, he’s not only a great sticksman but also, an all-round lovely fellow. Pop fact! I’ve never seen Ian unhappy.

Mark plays the keyboard, does backing vocals and also has produced and mixed both of my LPs. The first band we were in was imaginary, and then I asked him to be in Knickers (the band after the Loves but before this one), and we’ve been together ever since. Ahhh.

Ryan plays the bass, and he’s the Old Romantic I’ve known the longest having first crossed paths in Cardiff way back in 2005. In rehearsals when everyone else has a comfort break, Ryan and I will play guitar and drums, respectively, and become a low-rent White Stripes playing Big Star cover versions.