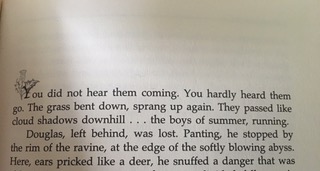 Don: The boys of summer, running … I grew up across the street from a city playground entirely covered in asphalt. Nowadays, the summer smell of evening rain on the oily bitumen of macadam is transporting. It’s right up there with the smell of gasoline and freshly mown grass, “Sugar Mountain,” the opening of chapter three of Ray Bradbury’s Dandelion Wine, the carnival scenes from Pollyanna and the mandolin songs on R.E.M.’s Green: “ … leap the sprinklers.”