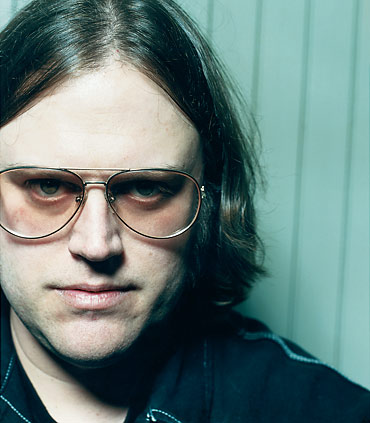 You were sort of an unknown before Girlfriend was released; what was it like dealing with the increased attention?
When I think back on that time, I do remember more the anxiety and the weird, bad feeling that I had than I remember the excitement. It’s not a bad thing to get some praise now and then, but [songwriting was] a thing I was doing on a really personal level—I really got into writing songs as a thing that I did alone. I played all the instruments myself and I kind of hid out and did it, and I didn’t think anyone was going to like hearing it. When Girlfriend happened, the amount of interest about it made me have to go out and work a lot and meet a lot of people, and suddenly I had what everybody thought about me all the time thrust back upon me. I wasn’t ready to hear all of that. It made me want to withdraw and feel trapped. I kind of drank a lot and was just generally unhealthy during that time.

Altered Beast (the 1993 follow-up) almost feels like a reaction against the Girlfriend hoopla. Is that reading too much into it?
If I’m to be totally honest in this interview, I’m inclined to go with you on that. There were a lot of things about Altered Beast that felt reactionary. Where Girlfriend was poised and very stylized, I wanted to break free of any conceptions of that on Altered Beast. I wanted it to run free and be wild. I wasn’t trying to write songs that were payback for people liking me, which is insane, and I understand as well as anyone that it just shows my own lack of self-worth or whatever; it was more that it came to the surface. I was kind of raw at the time, and I couldn’t help saying all this stuff. What it felt like to me when it came out was that everybody was just let down in me, like it was this ugly mess that nobody liked or thought lived up to Girlfriend. Now it has this kind of magical aura of being one of the favorites of real fans of mine.

100% Fun (from 1995) was a bit streamlined from Altered Beast, maybe more accessible. Was that by design?
I think it was a little bit. I definitely didn’t want to hear another person say my records don’t sound good, because everybody complained about the sound of Altered Beast. So, if nothing else, I wanted 100% Fun to be really strong and simple. I really felt like I could open up around [producer Brendan O’Brien], and he helped me make a record that was like I wished it would be. He got me to forget about all the pressure and have fun at a time when I would’ve felt the most pressured. I didn’t dream it would do as well as it did, and it really kind of saved my life and kept me going for a second era after Girlfriend.

Blue Sky On Mars (from 1997) seemed to garner some of your most divergent reviews.
The response to it commercially or critically reminded me more of Altered Beast—like, “It’s not as good as Girlfriend.” A lot of people criticized Girlfriend, saying there was nothing original about it and it was all stolen from old records. When people don’t like me, they always say that, even though I argue about that all the time. One thing I never did was learn every Beatles song and want to be like them in chord structure. I just like their vibe and how they sounded. I always bristled more at the “craftsman” label; maybe that’s why I kind of abandoned some of what was good about how stylized Girlfriend was in the records that followed it. I didn’t return to really trying to style a record much until Blue Sky On Mars, and then nobody liked that I was doing that.

With the pop-music marketplace so horrible right now, do you foresee a time when someone who makes the kind of music you make can be more successful?
I think so. It would be so easy to come along with an artistic aim that was true and show what crap everything is. I always say some kid is going to come along and write a heartfelt song that is meaningful and catchy and actually have success and mean something in people’s lives. The nagging fear for me is: Do people out there need that experience with records that was what we needed when we were young and made us want to make records? Or does the technology and the Internet and the way the world is now provide so many other ways to express yourself emotionally other than hiding out in your room with a record you relate to? When I was a teenager, I loved the Buzzcocks, Generation X, Elvis Costello. If you look at what those artists sold, they weren’t selling big in a world of full of big hack artists that were selling millions and millions of records. In that sense, maybe things don’t change so much. The thing that’s changed is the feeling like there’s no hope.

You’re known for the occasional sad song—do you write when you’re sad or is that just how the songs come out?
Writing does come a lot from a place of sadness. It’s sadness relief on a certain level. There’s this kind of intertwined relationship of sadness and joy in the face of it that comes through music. That’s why you can really be made to feel better by hearing something very sad. Expressing it through music gives you hope, and I guess that’s what art is—kind of finding hope in the horror that life is and rendering it somehow. For me, that’s the only saving grace I have. When the commercial things fall away, if I end up not being able to sell one record, all I have is me there to express myself and get my feelings out and get a good feeling because I did it.

Does (Girlfriend and Time Capsule cover subject) Tuesday Weld have a restraining order against you?
[Laughs] No, she doesn’t, but she did ask me if I was weird. One day (during the Time Capsule cover selection process), I had a message from her on my machine. It was interesting because I was given her number back during the time of Girlfriend and I never called her. So this time, I just picked up the phone and called her. At first, she was reticent about the photos. She said, “Oh, I don’t know, they’re so sensual and I was so young in those photos. I had no idea I seemed like that.” I was assuring her that I didn’t pick them because they were sensual and that I thought they just had this innocent, personal kind of thing, like you were hanging out with the girl. She said, “You’re weird, aren’t you? You like those really young, cute girls.” I was like, “I like really young, cute girls, but I’m not weird.” There’s no deeper weirdness about it or anything, and it was never about her age. It was more about her attitude, combined with her age, that made for this really interesting, strange combination to me, like she knew everything about life but she was, like, 15.