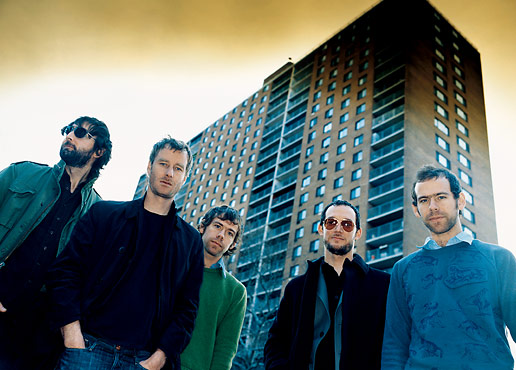 Bruce Springsteen wanted to praise him for his lyrics, but Matt Berninger, singer for Brooklyn-via-Ohio band the National, had already left the building. The occasion: a tribute concert to Springsteen’s Nebraska at which the National turned in a version of “Mansion On The Hill” before gathering onstage—along with a dozen or so other performers—to back the Boss on a Woody Guthrie tune. But when it came time to socialize afterward, Berninger was already cozily settled in at home in front of the TV while his bandmates downed whiskey with Springsteen.

“He told (guitarist) Bryce (Dessner) that he has all of our records, and we’ve heard that his walk-on music, before he comes onstage, includes ‘About Today,’” says Berninger, clearly tickled and still surprised, even nine months after the fact. “He was quoting songs and asking about lyrics, so it was pretty clear that he’d spent some time with our records, which is unbelievably flattering. I think I was home watching The West Wing while they were chatting with Bruce about lyrics. So, yeah, I wanted to kill myself the next day. But I was intimidated to talk to somebody who’s sort of a hero; I’d almost rather keep him as a mythic figure.”

Springsteen, like a good chunk of the National’s expanding fanbase, is apparently a diehard, picking a track from a 2004 EP released by Brassland, an indie label launched, in part, to release the group’s music. The wagon didn’t get heavy until astonishing 2005 breakthrough Alligator, which perfectly captured the band’s morning-after aura: a woozy atmosphere where Tindersticks and Leonard Cohen mingle, but where the occasional guitar-rock anthem isn’t considered gauche or unreachable.

“We’ve been lucky because it’s been a very slow incline of people finding out about us,” says Berninger, who also cites a 2005 co-headlining tour with pals Clap Your Hands Say Yeah as a turning point. “Alligator definitely reached a lot more people than the records before it had, but it never exploded. It had been out three or four months before people started paying attention. The only pressure has been internal, not wanting to repeat ourselves or phone something in.”

For the National—which also includes Dessner’s guitar-playing twin brother Aaron and another pair of siblings, Scott and Bryan Devendorf (bass and drums, respectively)—it’s time to complete the year-long task of creating fourth album Boxer, which will be released by Beggars Banquet on May 22. Berninger sounds relaxed for someone who still needs to finish lyrics for a couple of songs and get them recorded, mixed and mastered in seven days.

“I’m anxious,” he says, though the timbre of his voice doesn’t necessarily agree. “You can completely fuck up a song in the last minute if you’re not careful, by sprucing it up too much or whatever. There were a bunch of album titles thrown out that we all decided we hated. Green Gloves was one. It’s the name of a song, but as the title of a record, it conjures some sort of disgusting Spinal Tap image and Hamburger Helper. We’ve quickly realized that most of the titles we’ve thrown around sound horrible. Titles are hard. Naming our band … We made a major mistake doing that.”

Other decisions have been made with more precision and forethought. The National whittled down almost 50 instrumental sketches into 12 songs that the band is “ecstatic” about, and Berninger has taken great care in finding the right words to suit the moods. He throws away tons of lyrics while trying to strike a balance between sincerity and humor. (And, he says, trying “not to sound like an asshole.”) Certain lines on Alligator caught special attention by mixing pathos and levity, particularly this charming couplet from the gorgeous “Karen”: “It’s a common fetish for a doting man/To ballerina on the coffee table, cock in hand.”

“Because there’s a reference to holding my cock, that line sticks out,” laughs Berninger. “I don’t think that’s one of the best lines on Alligator, but it’s funny. There are similar moments on Boxer where it’s also kind of absurd. It’s always a balancing act. I think there has to be about 30 percent stupidity, otherwise it’s just obnoxious. I’ve achieved that; I’ve definitely got the 30 percent stupidity, so I’m proud of that. It’s usually the less flowery lines and less ‘lyrical’ things that I prefer in the long run. Writing lyrics is weird. It’s not poetry. If you think of it as poetry, you’re gonna write some terrible lyrics. To approximate an honest or truthful representation of anything—regardless of what the song is about—you’ve gotta have the balance of being sincere and a little ridiculous.”

One reply on “The National: The Slow Build To Such Great Heights”

He’s got the sexiest voice in the industry.