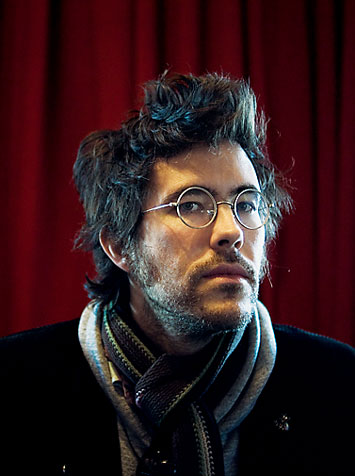 On the surface, you should be able to draw a straight artistic line from the dark, Leonard Cohen-like moodiness of neo-folkie Elvis Perkins’ debut album to his surreal Hollywood upbringing. (He’s the son of Psycho star Anthony Perkins and actress/photographer Berry Berenson.) But it’s not so simple, sighs Perkins, who documents one particularly jagged detour on vaudevillian romp “May Day!”

“I’m moving from Santa Fe back to Los Angeles on the first of May,” he explains of the track from Ash Wednesday (XL). “And I’d gone there to … gather myself on my way to some greater clarity. Santa Fe was a place of spiritual energy, and I felt it, for sure. So I spent a year and a half there, gathered my strength, my thoughts and powers, and I decided to move back to Los Angeles and make my music happen.”

What, exactly, does a wayward songwriter do in New Mexico? “I worked in the natural-fiber trade and the snow trade,” says Perkins. Some days, he punched the clock at the Santa Fe Hemp Store; others, he braved the winter elements as a ski-lift operator. “It was a rough job,” he shudders. “I got frostbite on my toes working at the top and dislocated my shoulder at the bottom. It was man against machine, since the liftie is the guy who’s responsible for breaking the seat’s speed and ushering it nicely up to the people who are waiting for it.”

With his actor brother Osgood on drums, Perkins soon turned the pain into poetry via the Ash Wednesday sessions. “My dad made records, too,” says Perkins. “Records of standards, Cole Porter and Tin Pan Alley stuff that were put out on Epic, with big string arrangements. Apparently, he was a huge hit with all the teenaged French girls at the time.”

Perkins first pounced on his father’s piano as a child, then switched to sax, then guitar as a grade-schooler, taking lessons from Knack bassist Prescott Niles. Soon, Perkins had developed the soft, quavery Songs From A Room-ish warble that colors Ash Wednesday processionals “The Nights & The Liquor” and “It’s A Sad World After All.”

It has been a sad world for this somber tunesmith. Anthony Perkins passed away Sept. 12, 1992, of complications from AIDS; Berenson died almost exactly nine years later as a passenger on American Airlines Flight 11, which crashed into the World Trade Center. Perkins reluctantly admits his debilitating depression is finally giving way to some kind of confidence.

“It just happens over time,” he says. “You become who you are, you think how you think, then you put what you think down on paper. And now that my songs are being heard by other people, I can actually say, ‘OK, that song’s good. That song works. You’ve created something that makes sense.’ So my work is the sum of all that I’ve seen and heard and felt, what was given to me and what I’ve taken.”

He’s got his “psycho” father’s creepy aura and him mum’s pug snout+coarse main.

He has bold and dramatic good looks — which complement his refreshingly down-to-earth and unpretentious conversation and his moving music. To become an artist on his own, creative and unconventional and unabashed of his accomplished parents takes courage and confidence. I admire this artist greatly. Good life to him!