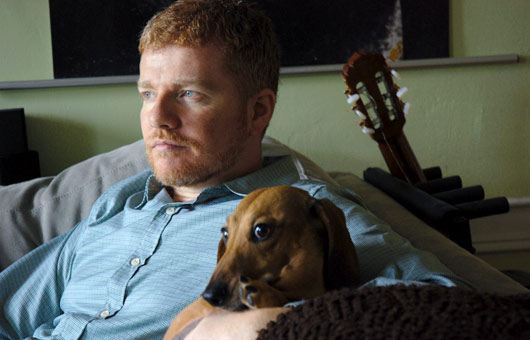 Carl Newman has long been credited as the architect behind the New Pornographers, a primarily Canadian union of musical talents that includes Neko Case, Destroyer’s Dan Bejar and a veritable wrecking crew of Vancouver players. What’s been surprising, however, is how easily Newman can assemble the same complex pop structures with just about any group of backing musicians on his two solo albums (credited to A.C. Newman). Newman’s latest, Get Guilty (Matador), has the same thrill-ride melodic twists, ornate instrumentation and gang-vocal shout-alongs as anything accomplished by the acclaimed Pornographers. The record also points to what Newman does best: He makes subtly orchestral pop music that doesn’t sound overly stuffy, sad or stiffly baroque. From the clickety-clack drumstick tapping on “Like A Hitman, Like A Dancer” to the tambourine-laced stomp “Collected Works,” Get Guilty is as much a mad dash through the closet of a music room as it is a studiously composed rock album. Yet for all his ambition and often-cryptic lyrics, Newman lets it be known that this is still a batch of simple songs and stories: “All Of My Days & All Of My Days Off” is an ode to his wife written for their wedding day, and “The Palace At 4 AM” is an homage to a Tiki bar in Vancouver.

Newman spoke to MAGNET from his home in Brooklyn’s Park Slope. To commemorate the release of Get Guilty, Newman will be the guest editor of magnetmagazine.com all this week. Check back for his daily posts on favorite music, film, literature and more.

“There Are Maybe Ten Or Twelve” from Get Guilty:

You’re now living in New York. Has that had any effect on the songs you’ve written for Get Guilty?
I’ve never been the kind of person who needed that. It’s not like I sit in a coffeeshop in Park Slope and the neighborhood influences what I’m writing. You’re basically isolated in a room, working. I think the biggest thing being in New York is the opportunity to work with all the other musicians that are around.

Was it a conscious decision not to use any of your bandmates from the New Pornographers on this record?
Well, it would’ve been very expensive to fly everyone out from Vancouver. Neko actually called and offered to be on the record, but I decided to use all different people. That’s no offense to Neko; what am I going to do, get a better singer than her? Everyone already knows she’s the best. Besides, being the main guy in the New Pornographers, I already sound enough like the New Pornographers as it is.

It says in your bio that (Get Guilty track) “The Palace At 4 AM” comes from a Donald Barthelme short story.
That story actually got turned around. What’s funny is that I was actually reading the Donald Barthelme collection Forty Stories, and one night I flipped the page and there was the (short-story) title The Palace At 4 AM. There’s a bar in Vancouver called the Waldorf, but I always called it the Palace. You’ve got to change the names of people and places when you’re writing a song, even if it’s just to make it sound better. I was just imagining that place and I guess 4 AM sounded better than 3 AM.

Well, I Googled the song title and the first thing that came up was a sculpture by—let me look at my notes—Alberto …
Giacometti?

Yes. It’s at the MoMA, actually. Are you familiar with him?
A little bit. I wonder if that’s where Barthelme got his title from. It’s funny how things connect. I have been to the MoMA, but I definitely had the Waldorf in mind when I wrote the song.

You recorded a cover of a-ha’s “Take On Me” for an upcoming Starbucks compilation.
I can name one other song by them.

Alright. You win this round.
It’s a good song, but not as good as “Take On Me.” I don’t know a single other song.

Get Guilty is being released on Obama’s inauguration day. Are you excited about our new president, or do you feel a little bit like an observer?
I don’t feel like an observer, actually. My wife is American, and I’ve been living here a while. We own an apartment together. So I feel like it does affect me, and it’s been a very exciting time even though I’m still Canadian and can’t vote.

Bear with me on this one: “The Heartbreak Rides” has a chorus of “yo-ho,” and I’ve noticed that each New Pornographers record seems to have a song with its own chorus syllables: “Hey la, hey la” from “Bleeding Heart Show” or “Na na na” from “The Laws Have Changed” or “Oh-la, oh-la” from “Challengers.” Is that an intentional thing you do?
Maybe it’s to get us another University of Phoenix commercial. Dan (Bejar) and I talk about this sometimes. The human voice is capable of so many things; it’s fun to think of different syllables. On “The Heartbreak Rides,” the “yo-ho” was just in the chorus as a placeholder because I hadn’t yet figured out what to sing. But it sounded good, so I left it in there. On “Prophets” (from Get Guilty) we sing “one high, one high, one high, one.” Those are real words, obviously, but it’s kind of the same thing. The (practice) of using nonsense syllables goes back to doo-wop, or even before that, actually. “Psycho Killer” has a great one: “fa fa fa.” I don’t think anyone used that before David Byrne did. On “A Quick One While He’s Away,” Pete Townshend had (the Who) singing “cello cello cello cello, cello cello cello” where he originally wanted a cello part to be.

A trivial New Pornographers question: Is “July Jones” (from Electric Version) a reference to the Mad Men actress January Jones?
Maybe I psychically could see Mad Men back in 2002, but it was fuzzy. It’s just random shit that happens. A friend in Vancouver asked me, “Did you date that girl Julie Jones?” There’s bound to be coincidences in the world.

The living Daylights, anyone ?
James Bond theme for the 1987 movie of the same name ?

Comment above is in reference to naming another a-ha song. Good call, Claudia.