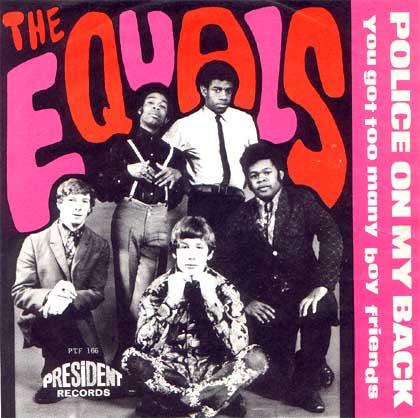 Newman: The Equals were Eddy Grant’s first group. It was an amazing shock to find out they existed. I love when you find a band you never heard about before and they’re completely amazing. I think Eddy Grant was 18 or 19, and he wore a blonde wig. They had one or two hits in England, and they did the original version of “Police On My Back” by the Clash. That’s an old ‘60s song by the Equals. Everyone thinks it’s a Clash song, but it’s a song written by Eddy Grant, the same guy who wrote “Electric Avenue.” The Equals are as good as the Troggs, I think, and in that same kind of style: driving, ‘60s hard rock with a real pop sensibility.

The Equals’ 1967 live performance of “Baby Come Back”:

One reply on “From The Desk Of A.C. Newman: The Equals”

They had a lot of great singles aside “Baby Come Back” including an early 70’s funky soul thing called “Black Skin Blue Eyed Boys” which is work checking out!

Another thing about them was they didn’t have any bass live…I believe it was just three guitars in their early days.