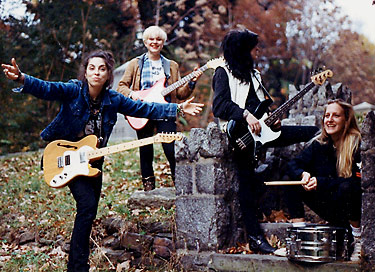 When the Friggs burst onto the Philly scene in 1991 with their debut single, a charmingly sloppy cover of the Troggs’ 1970 lust-charged “Come Now,” the all-girl quartet was still six months shy of its first show.

“Shake” from Today Is Tomorrow’s Yesterday:

“All of us were still learning how to play our instruments,” says guitarist Palmyra Delran. “My theory was: You cause a stink and people will show up. Our first gig was sold out. I guess everyone was curious.”

The Friggs spent their early years dropping singles like it was the 1960s, popping into the studio every few months to put their playfully trashy stamp on garage and surf standards such as the Shadows Of Knight’s “Shake.” Their raucous live shows, featuring singer Jezebel’s signature back bends and the band handing out half-eaten sandwiches as door prizes, cemented the Friggs’ status as the smart-ass queens of the retro scene.

Delran laughs as she recalls one particularly over-enthusiastic fan. “He was a foot-fetish guy. He started off licking my boot, so I made him part of the show of course, like, ‘Look at this asshole!’ And then a little later I look over and he’s jerking off into a plastic cup. So our manager threw her beer right on his dick.”

The Friggs’ only LP, 1997’s Rock Candy, was a polished set of mostly original tunes that reveled in Joan Jett-style rock ’n’ roll. The album garnered good reviews and led to opening slots for Beck and Cheap Trick.

After the Friggs called it quits in 2000, Delran moved on to other projects, and her debut solo EP, She Digs The Ride, came out in October. Recently, she spearheaded the release of Today Is Tomorrow’s Yesterday, a collection of the Friggs’ out-of-print singles and unreleased demos. One of the tracks, the aforementioned “Shake,” wound up in a memorable scene in Superbad. (Think grind-dancing and menstrual blood. Yeah, that scene.)