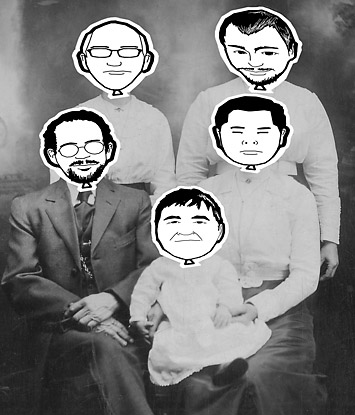 As if handed some imaginary baton from the late, great Bigger Lovers, the five-piece Canadian Invasion has inherited the title of Philadelphia’s best power-pop band. The proof is in sophomore album Three Cheers For The Invisible Hand (Transit Of Venus), a smartly written critique of—and ode to—suburbia. Three Cheers doesn’t rock the suburbs with rote teenage angst or anti-sprawl tirades, however; the voice of singer/guitarist Andy Canadian is coming from inside the ranch house, detailing the funny and sad lives of the members of an American family lost in their own bland anonymity. The clever lyrical conceit is held up by sturdy guitar-pop songwriting; Canadian Invasion sounds like Fountains Of Wayne with considerably less cheese, swapping regressive teenage fantasies and gimmicky Cars keyboards for Kinks-like character sketches and Teenage Fanclub guitar chime.

MAGNET spoke to frontman Andy Canadian and bassist Jim Foley about the big ideas and small details behind Three Cheers, out Feb. 17.

MAGNET: Let’s talk about the concept-album nature of Three Cheers For The Invisible Hand and its suburban-family storyline. Did you grow up in the suburbs?
Andy: I grew up in Cherry Hill, home of Orel Hershiser, walking distance from the Cherry Hill Mall. That part of Cherry Hill is just affluent enough for folks to be in the suburbs, but not affluent enough for them to have any ambition. When I wasn’t at the mall or Wawa, I was playing shitty guitar in somebody’s basement. My music is about this lifestyle. Cherry Hill is a place without an identity. They build strip mall upon strip mall, there’s nothing to do, there’s too much traffic and too little nature for a place that isn’t a city.

Three Cheers is loosely a concept album. It probably doesn’t hold up to scrutiny, but it is supposed to be the multi-generational story of the Bobbie Watson family. I got the idea from the Ionesco play The Bald Soprano. The play is an absurdist work about a dinner party in post-war England. One of the “jokes” is about the Bobbie Watsons, a husband and wife who are both named Bobbie. One morning I awoke with the idea in my head that the Bobbie Watsons were baby boomers in Cherry Hill. They had Audrey Horne from Twin Peaks for a daughter and a crack-smoking charlatan for a son. I liked the conceit because, much like Cherry Hill has no identity, the Bobbie Watsons have none, either. They feel like ghosts, moved into a non-place and by some invisible hand. All the songs on the record are about characters grappling with their own lack of agency in their lives.

To be honest, though, I think every song on the record is a fantasy/nightmare of what my life could be like. I’d like to think my current life is nothing like what I write about. But I only moved two towns over …

“Tomorrow And Tomorrow And Tomorrow” and particularly the title track seem written from a father’s perspective and are depressing in their realism: your kids will grow up and deny you a high-five or turn out rotten; the mid-life crisis is looming; the meaninglessness of the modern routine. Why is it so much easier to face some of life’s harsher realities when they’re couched in a catchy pop song?
Andy: When I was in college, my friends would drag me out to dance clubs and I came to really like dance music because there’s something nihilistic about it. Between the banality of the lyrics and the repetitiveness of the arrangements, it seems to suggest that we’re automatons, that our emotional responses can be boiled down to a few clichés and that we can be hypnotized by a few variations on the same beat. But dance music embraces that. Perhaps dance music even celebrates that.

I’d like to think that Canadian Invasion’s music does something similar. It reminds you that you’re not in control of yourself. Emotionally or physiologically you might respond joyfully to the melody or the arrangement of one of our songs while it’s telling you that your life is pointless. And maybe your life is pointless, but you should find some joy in it, goddamnit.

Can you tell me a bit about “John Mayer”? Are you using John Mayer as the object of a teenager’s derision/scorn in that song?
Andy: This guy wrote a song called “Your Body Is A Wonderland.” CBS is giving the man a variety show. I think he’s fair game for a murder fantasy featuring references to my high-school gym teacher, American Movie and Twin Peaks. If the logic of that statement is not apparent, I don’t know what else I can say.

Letters To Cleo is namedropped on “Juvenilia”—I did not see that one coming. But it got me thinking about the relative dearth of power pop since the ’90s. Was that era/style of music (Posies, Matthew Sweet, Gin Blossoms, et al) big for you as a listener?
Jim: I think I was 15 when Gin Blossoms came out and I remember really liking that record. My first real girlfriend and I might have had sex in the car while listening to it. I’ve come a long way. I’ve met the Posies a few times and one day last year out of the blue Jon Auer sent us a MySpace message asking us to mail him a copy of our record. Those Posies are fantastic folks. Real gents.

Andy: As much as I hate the power-pop tag, playing “Girlfriend” by Matthew Sweet in my high-school talent show was watershed moment for me, so I guess it’s destiny. After I played that song, a girl in the audience offered me a macaroon, and I knew power pop was the place to be.

You guys wrote a Phillies fight song that, apparently, put the team over the top. (There’s really no other explanation.) How’d you celebrate the Series win?
Jim: I have partial season tickets to the Phils and got to go to every home playoff and World Series game except the last one. It was awesome. We partied in the streets like everyone else but we’re not assholes so we didn’t break anything. I want to record a legit Phils fight song and play it at opening day. We deserve that much given our obvious contribution to the 2008 postseason.

Why is Joe Satriani thanked on the CD sleeve?
Jim: Joe’s music speaks to me in ways I can’t describe with words … Also, he’s always begging me to play bass on tour with him but I haven’t taken him up on his offer yet. Now if LL Cool J goes back on the road again and needs my services, consider me on immediate hiatus from Canadian Invasion.

Andy: The primary reason to play music is to have a license to be cheeky and ridiculous all the time.

We recently published an issue that had a section on Philly bands we’ve covered over the last 15 years we’ve been doing MAGNET. What do you like and dislike about being in band here?
Jim: I am a MAGNET subscriber, so I read the section on the Philly bands. Philly is the best city for anything, really. I think it’s a pity that more people don’t keep an ear to what the local talent has to offer, be it music or art. This town is popping at the seams with unique personality and the living space in a metro area can’t be beat … er, it sucks, stay away. It was nice to see some of our friends grace your pages in such fine fashion, particularly Brian McTear. Brian loves his craft and that’s the way it should be.

Funny story: One day we were recording with Brian at his studio in Fishtown and when we came outside to go eat lunch our drummer George (Groves’) car was not where he parked it. Fuck! Some punk stole it, right? So we call the cops and then a few minutes later we see a garage door on the factory building across the street open and out comes George’s car. We all go running towards it and this man gets out yelling, “I didn’t steal it!” Turns out someone with the same make and model as George’s car left their car for repairs and put the key and a note in the shop’s mailbox. Their car key worked on George’s car. The cops said that is a one -in-75 possibility. Then Brian introduces the man as Joe the Train Guy, who has the biggest model train collection ever and hangs out with Neil Young. You gotta love this town!

Listen to more songs from Three Cheers For The Invisible Hand here.