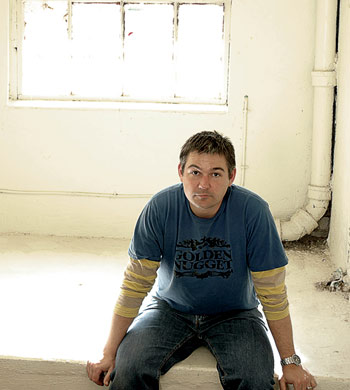 Stewart Pack has been a hero of mine for many, many years, for a number of different reasons. When I first accosted him in a pawnshop in Knoxville in 1992, he never treated me like the teenage fanboy that I was. Stewart’s early-to-mid-’90s bands, One Nine Hundreds and Pegclimber, are not just among my favorite Knoxville groups ever, but my favorite bands ever, from anywhere. They were as good as some of the SST Records bands I idolized then (and still do) and better than some of them. Bassist Larry Brady was the other common denominator in both bands, with Morrie Rothstein and then Shayne Ivy handling the drums.

Stewart has composed, performed and produced an immense catalog of recordings in the years since, under an array of different monikers (Glowplug, Dinky Doo, Paperbacks)—sometimes under his own name, solo or with co-conspirators like Paul Turpin, Gregg Dunn, Phil Fuson and, most recently, guitarist Doug Gillard (Death Of Samantha, Cobra Verde, Guided By Voices). Beached Whale, a 15-track retrospective in “standard play” mode that contains five more albums in mp3 format, is a great place to start. Visit Stewart’s website to download the entire sample album free or purchase all six LPs’ worth of music for $15 postage paid. It’s so worth your while, I can’t believe you’re still reading this.

I’m regularly stopped in my tracks by one of Stewart’s brilliant songs. And did I mention his design work? Superdrag’s merch on tour more or less functions as a miniature gallery show of Stewart’s design. (See Last Call For Vitriol, Changin’ Tires On The Road To Ruin, John Davis, Arigato!, 4-Track Rock!!! and Industry Giants.)

“About Your Illness” from Beached Whale:
https://magnetmagazine.com/audio/AboutYourIllness.mp3