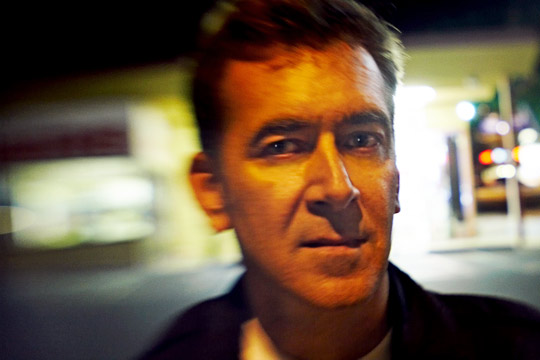 On the title track of his new In The Late Bright (Second Motion), singer/songwriter Tommy Keene claims, “The nighttime world has lost its appeal.” Don’t get the idea, though, that this notorious night owl likes to turn in early with a good book; he just tends to chill in his L.A. abode rather than go clubbing. “Remember when you were young, you wanted to go out because you might miss something?” he asks. “Well, I’m sort of over that. I’d rather sit at home and make my own fun.” Like create a MAGNET mix of his favorite tunes to get you in a “late bright” mood.

Keene—a genuine power-pop legend responsible for 1984 classic Places That Are Gone and subsequently employed by Paul Westerberg and Robert Pollard and admired by the likes of Jeff Tweedy and Pete Buck—will be guest editing magnetmagazine.com this week.

THE BEATLES “Blue Jay Way” (1967)
As I write this, there is indeed a fog upon L.A., and what better song to start off with than the spookiest tune the Beatles ever did. I can imagine George in his rented house in the bird streets high above L.A., waiting for his friends to show.

FUCKED UP “Golden Seal” (2008)
I’ll be hanging out, having some spirits and such, and this cool instrumental will come on and add to the vibe.

GUIDED BY VOICES “Learning To Hunt” (1997)
This is one of my favorite somber, reflective Bob Pollard tunes. Dig that vocoder-like thing in there!

AEROSMITH “Seasons Of Wither” (1974)
The best Aerosmith song ever? It has an awesome, moody intro before the band comes crashing in. When I first bought the album (Get Your Wings), I thought the line in the chorus was, “Ooh, ooh, war is mean/I feel so sadly for you,” which made sense to me: Yeah, war is mean, man! Turns out, of course, the line is, “Ooh, ooh, woe is me.” Oops. That works much better.

ROXY MUSIC “Sentimental Fool” (1975)
I saw them on the Siren tour, which is the LP this song is from. We had ingested something before we left for the show, and as the lights went down, a giant circular screen with a projection of Jerry Hall, from the album cover as the siren on the rocks, lit up and then started spinning around. The somethings kicked in, and we could make out silhouettes of the band members walking behind the screen as they took their places on stage, all while the scary instrumental opening was playing through the PA. Like clockwork, they segued right into the music now playing live, and as a huge spotlight lit him up, Bryan Ferry crooned the first few lines of the song.

BRUCE SPRINGSTEEN “State Trooper” (1982)
No doubt recorded solo on his four-track on some dark and misty night. Bruce goes psychobilly! Who’d have thought?

BIG STAR “Nighttime” (1978)
This is Alex Chilton’s chilly, atmospheric ode to going out: “I’m walking down a freezing street/Scarf goes out behind me.” I often play this song in acoustic shows and get weird looks from people when I sing the line, “Get me out of here/I hate it here.”

EDGAR WINTER GROUP “Sundown” (1974)
Actually written by Dan Hartman (R.I.P.), who wrote many of their hits (like “Free Ride”) and had a career later on with dance songs. Its jangly chord pattern is beautiful.

MISSION OF BURMA “All World Cowboy Romance” (1981)
An apropos ending to this spooky, scary, atmospheric mix. The amazing guitars seem to fade off into the sunset as the tune winds down. Goodnight!

this is great. nice to hear stuff that’s not the latest hyped mess – just good music.

Great list! I’ve been singing the praise of TK for years to anyone who would listen and believe he is one of the most underrated songwriters of our time. Can’t wait to hear the new album!

Nice picks. Good prelude to listening to your new CD. You should tour with Robyn Hitchcock … and play Colorado.

Never heard ‘Sundown’, but I can see you covering it. was it a ‘b’ side or something? I don’t remember it from ‘They Only Come Out At Night’….

GREAT STUFF, Tommy!!
I love this list and think this should be a ‘regular thang’. It would be interesting to see lists from other musicians.
Carry on…