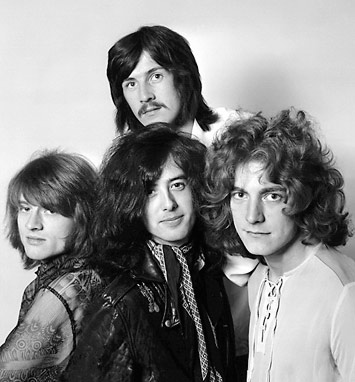 Keene: I was extremely lucky as a kid, as my dad would take my brother Bobby and me to rock concerts. After the first one, which was the Dave Clark Five (whom he liked), he would just drop us off and pick us up. The shows were quite often on school nights, so it would be the old, “Meet me here at 11:00 after the show’s over.” In May 1969, I was introduced to Led Zeppelin. I’d never heard anything like them—they sounded like a rock band from Pluto. About a month later, we saw an ad in the paper for a two-night festival at Maryland’s Laurel Race Track, situated about halfway between Baltimore and Washington, D.C. The first night featured Led Zeppelin, Johnny Winter, Jethro Tull, Al Kooper, the Edwin Hawkins Singers and blues guitarist Buddy Guy. After an impassioned plea to Dad, we got the thumbs-up to go. The night of the show, my brother and I and my friend from down the street got dressed up in our little jackets and ties—this was a concert, remember—and got dropped off outside the track. What none of us had bothered to figure out was that this show started at 8 p.m. and had six acts on the bill, with Zeppelin going on last. It certainly wasn’t going to be over by 11:00!

We found our way to our seats, which were actually wooden folding chairs in the middle of the track on the grass. About halfway through the show, there was an announcement that anyone in the back seats could move closer to the stage, so we moved from Row L in Section C to about Row D in Section B. My dad, of course, had made it a point to write down our exact section and seat numbers prior to the show. (More on that in a second.) The crowd itself was something we weren’t prepared for. This was the summer of Woodstock, and various long-haired freaks and topless chicks were running around crazed and stoned out of their minds. We must have looked ridiculous: three kids, age 10, 11 and 13, with our little outfits. I distinctly remember some hippie dude coming up to me and offering me a hit of acid. Er, no thanks, man. Zeppelin came on about 1 a.m., and we were having such a great time we hadn’t thought about Dad or anything else, although if he had wanted to find us, especially after we moved seats, he was out of luck—there had to have been more than 10,000 people there. Zeppelin were loud, snarling and unbelievable. They started off with “We’re Gonna Groove,” which I didn’t know at the time, and went straight into “I Can’t Quit You Babe.” After “Dazed And Confused,” Robert Plant told the crowd, “Here’s a new one off the next album. It’s called ‘What Is And What Should Never Be.’” I’ll never forget that moment.

We were in our ultimate rock bliss when my brother left to go to the bathroom. Bad move! Dad, true to his word, had shown up outside around 11:00, and after we didn’t materialize, he persuaded the guys at the gate to let him in to look for us. Imagine what he saw walking into that place. (The one funny thing I remember him laughing about, but not at the time, was a guy passed out under the tap of the beer truck as the liquid kept pouring into his face.) As my brother came out of the men’s room, a hand grabbed him by the neck, and it was all over! He came back to the seats and said, “Dad’s pissed off as shit and we gotta go now!” It was past 2 a.m., but I said, “They’ve just started ‘How Many More Times’!” I remember watching John Bonham’s drum solo from the side of the crowd as we were angrily marched out. We were yelled at the entire way home, as it seems my friend’s parents had been on the phone to my mom and were threatening to call the police: “Where is our son?” The last thing my dad said to us as we got home was, “I don’t care if the Beatles are playing up the street, you’re never going to another rock concert again!” Two months later, the Byrds were playing downtown. “Hey, Dad, what do you think?” “Oh, all right, just keep those grades up!”

Led Zeppelin’s “What Is And What Should Never Be”:
https://magnetmagazine.com/audio/WhatIsAndWhatShouldNeverBe.mp3

One reply on “From The Desk Of Tommy Keene: Led Zeppelin, Laurel Race Track, 1969”

What a great story. That’s awesome that your dad was so supportive of your passion…and of course that you got to see Zeppelin! Totally worth getting yelled at on the way home.