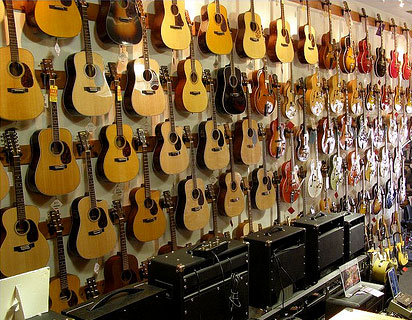 Keene: When I took my first guitar lesson, I’d been playing for a while. My first song was “Gloria”: three chords, E, D and A, over and over. I signed up for lessons at a local music store in suburban Maryland. On the drive up there, my mom and I were listening to the radio, and a song came on that completely rocked my world: the Who’s “I Can See For Miles.” I had just seen them on The Smothers Brothers Show, and an older kid in the neighborhood had seen them that summer opening for Herman’s Hermits. I went into the lesson and announced that I’d just heard this song on the radio and that’s what I wanted to learn to play. My teacher, a middle-aged man who looked like a cross between Burl Ives and Mitch Miller, just shook his head and said, “We first must start off with some scales.” Those lessons didn’t last long, and I basically taught myself how to play by pestering guitar-playing friends of mine to show me various chords and licks to standard rock numbers.

That memory of the mom-and-pop local music store stays with me. In Santa Monica, Calif., eight blocks from the beach, there’s a similar store I frequent called Truetone Music. One of the owners is Paul Flynn, also a native of the D.C./Maryland/Virginia area and a friendly guy who handles guitar repairs, intonations and general stress-free service. They offer a nice alternative to the sometimes intimidating corporate chain stores like Guitar Center, where you’re inundated by already marked-up holiday sales and endless kids wailing horribly to the latest drop-D music. Truetone has an unbelievable selection of vintage guitars and cool boutique amps, lessons for the beginners (without the Burl Ives attitude) and a friendly staff that is attentive to the needs of the novice as well as the seasoned professional. And don’t be surprised if you run into Dave Edmunds, Chris Spedding or Nigel Tufnel from the legendary Spinal Tap.

The Who’s “I Can See For Miles”:
https://magnetmagazine.com/audio/ICanSeeForMiles.mp3

4 replies on “From The Desk Of Tommy Keene: Truetone Music”

bought a truetone guitar and was wondering about the value….i realize that it needs some tlc, but was wondering if you could tell me when it was made and a possible range of values….it is a truetone acoustic/electric guitar….at least that’s what i’ve been told and the serial numbers on the back are …….eg665-2hr 1000…it’s missing 2 knobs and one of the string pegs….but otherwise, it looks nice….possible to bring in or send email photos if that helps….lemme know
thanks,

I found one in a pawn shop. Same exact serial number save the one I looked at said EG665-2HR 1002
I have never seen the Truetone name in the headstock like this. All capital letters, almost a Comic Sans font. This one played well, actually a great rockabilly tone with blues overtones, but had minor cracks where the headstock bolted on, one tone knob had a new one although machined rather well, the neck had been off a number of times and the neck plate was on upside down. Also the bridge was a mess, a piece of fretwire put into a block of walnut, did have adjustment knobs, this on top of another piece of walnut. I passed on it, but would love to know if I should let it hang or go get it. They wanted $120.

I’m going back to buy it. It was made in the Greco factory, also came with the nameplate Norma on it. Musicswapshop.com has one on their website. Norma EG665. They are an Australian store. They want $899 AUS for it. It also came with a Bigsby type whammy, which on the one I looked at is missing the handle mechanism, spring and flat plate. Just the string holder remains. I’ll have to scallop one of those ash tray bridges off one of my Tesco’s to fix the walnut bridge mess but only till I find one. Even with all that, for $120 US, I’ll bite. And it sounds supreme.

Got mine for free. Someone abandoned it in an apartment at my son-in-laws complex. No strings, only the base of the bridge, threaded posts and thumbwheel adjusters. It has only the bottom part of the tremolo/tailpiece. I put an adjustable bridge piece on it, a set of GHS Jammers 9-42, plugged in and love the tone!!!! Only the bridge pickup works, but I’m confident the screwed up solder joints I can see thru the f-hole tell the story. I’m looking for the roller bridge, the tremolo arm, spring, upper spring cup/actuator, and the pick guard & mounting brackets. When I find the hardware I will also do the wiring repairs. I play left-handed, but am learning righty on this guy, and having a blast. This was someone’s player till they messed up the electronics. Any ideas on finding the hardware?