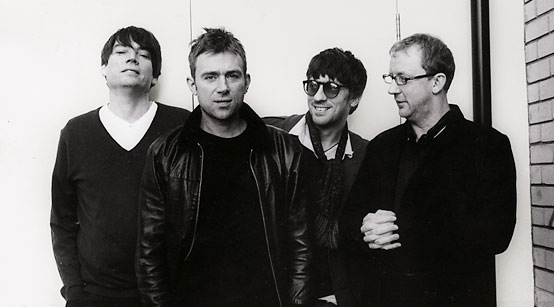 Blur was one of the most quintessentially English bands of the Britpop era. Drifting from shoegaze to grunge to pop, the group always retained its core influences of the Kinks, the Beatles and XTC. But despite a few solitary hits, Blur never quite made it in the U.S. And that’s a shame, because with a span of seven full-lengths, multiple EPs and some killer singles, Blur proved that it had the staying power many of its contemporaries lacked. But as the band succeeded financially, guitarist Graham Coxon grew more and more disenchanted, finally leaving after 1999’s 13. Following 2003’s difficult Think Tank, Blur went on hiatus. Since then, Coxon has developed a prolific solo career, singer Damon Albarn founded Gorillaz, bassist Alex James started a cheese farm, and drummer Dave Rowntree ran unsuccessfully for public office. Now reunited as a four-piece for the first time in nearly a decade, Blur is back in the public eye. And with rumors of a new album circulating, what better time to examine its most underrated and overrated songs?

:: The Five Most Overrated Blur Songs
1. “Song 2” (1997)
Woo-hoo! Now name another line from “Song 2.” A Nirvana parody that the rest of the world took seriously, “Song 2” is good, grungy fun and remains Blur’s highest-charting single in the U.S. It’s not that Blur couldn’t do heavy riffs (the brilliant “Popscene” or “Bank Holiday”) or that it didn’t know when to just have fun (“Girls & Boys”). So what made “Song 2” so huge? It’s probably the woo-hoos.

2. “Parklife” (1994)
Parklife the album made Blur the defining band of the Britpop generation. (For the few months until Oasis’ (What’s The Story) Morning Glory? came out, anyway.) But “Parklife” the song made Blur feel like a caricature by reducing its many talents into something cheap. “Parklife” goes beyond comedy and into just plain goofy. In attempting a Who-style character piece (the song even features spoken verses by Quadrophenia mod Phil Daniels), Blur assumes the “cheeky chap” image that would often hold it back from experimenting with its musical potential.

3. “She’s So High” (1991)
With its droning beat and slightly sketchy lyrics (“I want to crawl all over her”), Blur deserved a better beginning than “She’s So High.” Despite its flaws, Leisure is a thoroughly solid debut thanks to buoyant numbers “There’s No Other Way” and “Bad Day.” So why start off a career with “She’s So High”? At least it gave Blur a chance to produce one of the most dated videos in music history.

4. “Country House” (1995)
By the mid-’90s, Britpop was beginning to show signs of strain. With Oasis scrambling to repeat the success of Morning Glory, Pulp struggling to deal with success and Blur working on a follow-up to the massive Parklife, it was only a matter of time before it all fell apart. “Country House,” the center of a publicity feud with Oasis, was Blur by the numbers, complete with a goofy video and a sneering dismissal of the middle class. While it might have won the battle of the charts, Blur ultimately lost the Britpop war, and “Country House” has aged about as well as Albarn’s Penguin Books T-shirt.

5. “Crazy Beat” (2003)
OK, so there aren’t that many fans of “Crazy Beat.” Not in this universe, anyway. But it was one of Blur’s final singles and also one of its biggest chart successes. A supposed reinvention that wound up more annoying than inventive, “Crazy Beat” can always be defended under the catch-all of “experimentation.” Duck noises are not experimentation. They are annoying. And until Blur release something new, our last memories of the band will be of “Good Song” and “Crazy Beat.” That is, frankly, unacceptable.

:: The Five Most Underrated Blur Songs
1. “You’re So Great” (1997)
A Coxon number from the often bombastic Blur, “You’re So Great” is strangely sweet and instantly memorable. Coxon’s too-often neglected talents (see 1998’s “Coffee & TV”) might have led to the band’s split, but it gave him free rein to explore a vibrant solo career. True, if the world had paid a little more attention to Coxon during his time with the band, we might’ve had more Blur. We certainly wouldn’t have had Think Tank. But we probably wouldn’t have had this overlooked, stripped-down love song gone awry. “Sad, drunk and poorly,” indeed.

2. “Badhead” (1994)
A brief pause in the hectic mash of Parklife, “Badhead” is one of Blur’s loveliest pop moments, with a horn section and ironic detachment in spades. But as with many of Blur’s best songs, it’s clear that Albarn’s claim of “I might as well just grin and bear it” isn’t fooling anyone. How “Badhead” wasn’t released as a single is surprising; how it didn’t become a pop classic is unthinkable.

3. All of The Great Escape (1995)
OK, so The Great Escape wasn’t the best follow-up to the chart-conquering Parklife. It was indulgent, possibly due to some illicit substances consumed during its creation. But The Great Escape is stacked with some of the band’s best singles (“Stereotypes,” “Charmless Man”) and one contender for its top five (“The Universal”), as well as Albarn’s clever, even haunting, lyricism. Take, for instance, the Morrissey-influenced disaffection of “Best Days”: “Other people break into in a cold sweat/If you said that these were the best days of their lives.” The album is Albarn’s most notable attempt to recapture the Kinks circa Village Green in the light of the morning after, and even if it doesn’t always succeed, it makes for an interesting failure.

4. “Caramel” (1999)
Like Blur grown up, 13 struck a fine balance between feedback-heavy fuzz (“Bugman”) and delicate melodies (“No Distance Left To Run”). In a way, it was its Abbey Road, a breakup album (or at least, a breakup-with-Coxon album) that combined the experimentation of Think Tank with both classic melodies and straightforward lyrics. This gospel-infused number is one of Blur’s strangest ever, ambient and dreamy and completely deserving of its seven-minute length. While “Tender” might have been 13’s most celebrated tearjerker, “Caramel” is a haunting depiction of a band coming apart at the seams.

5. “Mace” (1992)
Picking up 1994’s The Special Collectors Edition is a must for any obsessive Blur fan, as it tracks the band’s b-sides up to the Parklife era. But it’s worth getting for “Mace” alone, a snotty, poppy number that taunts, “Used to know/But now you don’t.” While “Mace” was the b-side to the classic “Popscene,” it stands completely on its own. At its release, Blur was still in the process of finding a new style that would be artistically and commercially successful. Even if the culmination of that process—Modern Life Is Rubbish—didn’t sell as good as it should have, it’s gone down in history as a classic precursor to Britpop. For a band still uncertain of its future, “Mace” is a surprisingly cocky example from the Modern Life era.

I agree with Badhead. It’s the first song I think of when I think of underrated Blur songs. But I also like Resigned and Oily Water from Modern Life is Rubbish.

Of course, as apparently required by the editors, you choose Song 2 because it was pretty much their only hit in the US, not because it is overrated. It’s a perfectly fine song and fun to scream in karaoke.

Hard to argue with any of the choices on this list, pro/con. Part of me wanted to see “This is a Low” SOMEWHERE here (one could make an argument either way) but “Mace” is a pretty damned inspired choice so it doesn’t really matter. Psyched that Blur reunited while still vital, can’t wait to see them when they tour.

Chemical World is their most underrated song. The Kinks would be proud. In fact, I’d place the whole Modern Life is Rubish as deeply underrated.

Ricardo & Ianroure –
I think Modern Life is probably the best album Blur ever put out (and Chemical World is definitely a standout). I guess that since today Modern Life is so critically hailed (especially in their home base of the UK, even if it never sold as well as it should have) that I felt that it wasn’t exactly underrated. But it’s probably my favorite Blur album, no question about that!

I agree that Coxon was underappreciated through most of Blur’s career, and that his solo work is pretty awesome. But I also have to defend Think Tank as pretty underrated, despite “Crazy Beat” and other attempts to make it pop-savvy. The core of it was a 90-degree direction change straight into the anti-pop jungle. I liked “Ambulance,” “Out of Time” and “Battery” more than most other Blur songs.

Everything else is right on.

Elf…I agree with Oily Water. That song is amazing, but I think it gets overlooked due to it seeming a bit like their Leisure “Baggy” sound. It’s really great though, probably my favorite Blur song.
Ricardo…Chemical World is one of the best songs by anyone, ever, so I agree with that too, when you hear it live it’s brilliant.
Also overlooked gems:
Swamp Song
Ambulance
Trouble In The Message Centre
Popscene
Swallows In A Heatwave
Woodpigeon Song…

HECK YEAH, ‘The Great Escape’ is my fav Blur album. For underrated, I would’ve included a song or two from ‘Think Tank’, people tend to pass their last one by.

I can’t think of a worse song by a band I love than Crazy Beat. The horror…

Nothing about the song Parklife makes me think of The Who, Phil Daniels or no Phil Daniels. Inapt.

TROUBLE IN THE MESSAGE CENTRE !