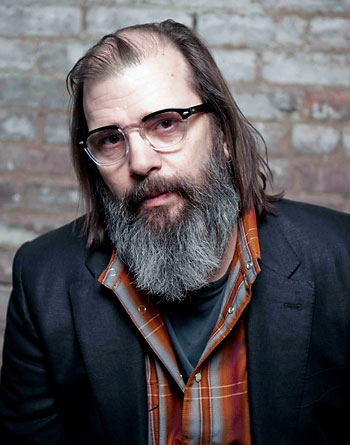 Steve Earle’s friendship with Townes Van Zandt got off to a shaky start in 1972 at Houston’s legendary Old Quarter, where a heckling Van Zandt tested the young upstart’s folksinger fortitude. Thirty-seven years later—his hard-living mentor having expired 12 years prior, at age 52—Earle has finally seen fit to eulogize Van Zandt with Townes (New West). The 15-song collection falls somewhere between bald-faced tribute and a thoughtful reassessment of the supremely talented—and equally troubled—Texas troubadour’s subversively influential output. Appropriately, opener “Pancho And Lefty,” Van Zandt’s best-known song, is afforded a reverential, bare-bones treatment by Earle. Elsewhere, the Dust Brothers’ John King produced “Lungs,” and Tom Morello (Rage Against The Machine, Audioslave) guests on guitar; a bluegrass band makes an appearance on a few tracks, as does Earle’s wife, spitfire Americana lass Allison Moorer. Mostly, though, Earle keeps the distractions to a minimum—the right call for songs this achingly vivid and fraught with innate complexity. Thoughout Townes, the greatness of its namesake is profoundly apparent, and no one is more qualified to convey that greatness than the guy who’s perhaps his biggest fan. MAGNET caught up with Earle amid a hectic publicity blitz for the new album. (Read our 2000 Earle cover story.)

MAGNET: So you’re pretty settled in New York these days.
Earle: I’m more comfortable there than I’ve been inside the city limits of any municipality for any length of time. I don’t guess I ever really felt at home in Tennessee. I didn’t know anybody where I used to live in Fairview, except a few people I got to know because they were torturing my kids after I got out of jail. My dad got sick the last couple years of his life and couldn’t get around the way he used to. I like to think I’m gonna spontaneously combust in the middle of the best performance I ever gave, but it probably won’t happen that way. So I started asking myself, “If I do get my wings clipped, do I want it to be in Tennessee?” I decided not.

Would it be wrong to call Townes a covers album?
I’m probably more taken aback when people call it a tribute record. To me, a tribute record is when a bunch of artists record songs by an artist who everybody thinks a lot of—who they probably don’t know—and then the record label doesn’t pay them for it. Usually there’s a charity involved, and I always have doubts about whether the money actually gets there. The Sweet Relief records were the first ones, and they were great because they were made for the right reasons. Everyone did it because they loved Victoria [Williams], and then everybody started trying to clone that.

So what would you call the album?
It’s both a tribute and a covers record—they’re not my songs, and it’s a tribute to my mentor. There’s a precedent for this in art and philosophy, of going back and, sort of by rote, retracing your steps. Townes is so much of who I am that it was much more of a profound experience than even I thought it would be. It’s a drum I’ve always beat: how good Townes was. I did it partially because I said I’d do it. I tend to do what I say a vast majority of the time, and I’m pretty proud of that.

Are you surprised you didn’t make it sooner?
I’m pleasantly surprised that I actually got it done. I’m a singer/songwriter, and I know what the obstacles are. I’d try to do it before, and someone would fly an airplane into a tall building, the president would do something particularly stupid or I’d fall in love and move to New York City. Then I’d have something else I felt like I had to write about. I’m more aware of my mortality in what I perceive to be a really positive way than anybody I know because I almost died. So I don’t waste time.

You keep the bells and whistles to a minimum on Townes.
Most of the songs were recorded as solo performances, and I added everything else later, very carefully. It’s based on my recollections of Townes playing this stuff live, rather than any records he made.

Townes’ legacy is such that he’s worshipped by a handful, while others are drawn to his almost-mythical self-destructive ways. Then there are the many folks who’ve never even heard of him. Perhaps this record will change that.
A lot more people know who he was than when I started making records; a lot more people knew about him the last 10 years of his life. People saw him—they didn’t see what I saw in the ’70s, but they saw him—and some nights he could be really good. The legendary version of Townes is a little too skewed toward people who have (the Velvet Underground’s) White Light/White Heat in the front of their record collections so everyone knows how intense they are when they have a party. I don’t think that’s anywhere close to what he was all about. He was one of the best songwriters who ever lived. The fact that he was an alcoholic and probably had some mental-health issues is completely and totally beside the point. The reason more people don’t know who Townes is is Townes’ fault. Whether that was something he couldn’t help is another discussion and none of our business. He shot himself in the foot—trust me. Any time there was any danger of Townes becoming any more famous than he was, he sabotaged it.

Did you see much of Townes before his death?
It was a year and half between the last time I saw him and when he died, but that wasn’t uncommon. The last 10 years of his life, he toured. I toured.

Talk a bit about when the two of you first met.
It was Townes and about five other people in the audience. He was insisting between songs that I play “The Wabash Cannonball,” which I finally had to admit I didn’t know. Then he berated me by saying, “How dare you call yourself a folk singer?’” I always thought Roy Acuff was probably an asshole. I’m a Hank Williams fan. So I played [Van Zandt’s] “Mr. Mudd And Mr. Gold,” and that shut him up.

You’re finishing a novel. What’s the gist of it?
It’s about a defrocked doctor who lives in San Antonio, Texas, in 1963. He’s a heroin addict who supports his habit by performing abortions mainly—and patching up the odd gunshot wound in the middle of the night. Ten years earlier, he was with Hank Williams when he died, and when he gets really fucked up, Hank’s ghost shows up. It’s called I’ll Never Get Out Of This World Alive. I should get it out by the end of this year or the beginning of next year.

Are you happy with the books that have been written about your life? There are two, correct?
Are there? I’ve never read ’em. I don’t want to hurt your feelings, but I’m not gonna read this—I don’t read anything written about me. I’ll occasionally fuck up, forget to count two days after I played in New York, and pick up the Times. If see the pictures, then I’m just as egotistical as anyone else and I read it. But I really try to insulate myself from that stuff. But I’m kind of a press act. I exist because people write about me or don’t write about me. But if it’s bad, it hurts your feelings. If it’s good, you wind up being Ryan Adams or somethin’.