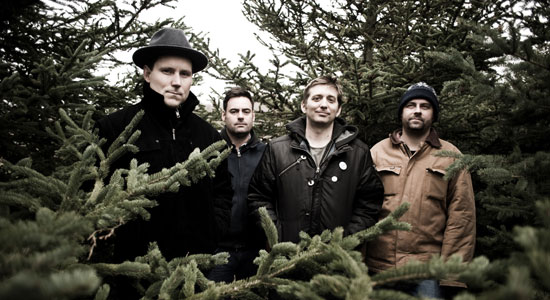 It doesn’t take long for Weakerthans frontman John K. Samson to size up what kind of a crowd he’s been dealt in San Francisco tonight. When his tongue-in-cheek announcement of a local curling tournament (that bizarre sport most U.S. citizens notice only during the Winter Olympics that involves sliding a heavy polished stone, shuffleboard-like, down an icy pitch) gets a pretty good response, he’s home free, preaching to the choir for the rest of the evening. Of course, it doesn’t hurt that the Manitoba quintet, with a topnotch set list of folk/rock songs with plenty of power-pop flourishes, is playing to a sold-out house that seems at least half full of transplanted Canadians, ready to sing along in between trips to the washroom to offload the Molson. With guitarist/pedal-steel whiz Stephen Carroll, bassist Greg Smith and drummer Jason Tait (along with an unnamed utility man who aptly handles keyboards and trumpet and a female French horn player in for a couple of tunes), the Weakerthans are easily the best Canadian band seen in these parts since Vancouver’s Pointed Sticks played their fabulous Stiff Records debut single “Out Of Luck” to a pogoing crowd at the Mabuhay Gardens three decades ago.

Samson, in his mid-30s, is blessed with a perpetually innocent, Holden Caulfield kind of voice, one perfectly suited to the final line of “Relative Surplus Value,” a song about the alienation of a young man at a faraway business convention: “Could you come get me?” This stuff couldn’t be sung more convincingly by the peach-fuzzed trio from Superbad. On the other hand, the stylish lyrics, well worth a read on 2007’s Reunion Tour, at times are worthy of Neutral Milk Hotel’s 1998 masterpiece In The Aeroplane Over The Sea. High praise indeed.

Halfway through the set, as the rest of the boys go take a pee, Samson delights the crowd with a stripped-down version of the frostily titled “One Great City!” It’s an homage/wrecking ball swung with love in the direction of the Weakerthans’ hometown. (And former base of operations for a chart-topping rock band and an NHL franchise.) “The Guess Who sucked, the Jets were lousy anyway,” warbles Samson as he urges the throng to join in on the song’s tagline: “I hate Winnipeg!” They readily oblige with a roar that might have been heard all the way back to Manitoba. “Civil Twilight” and “Confessions Of A Futon Revolutionist” are roaring anthems that still leave plenty of space to peek through sheer curtains, like some night-stalking Peeping Tom, at the occasional neurotic episode inside. Carroll found time to unholster what looks like either a styrofoam bullwhip or an oversized cat’s toy; swung overhead at different speeds, it makes a couple of notes that resemble the quirky electronic throb of a theremin.

The populist leanings of the Weakerthans are put to the test when they pull some kid in a black ballcap out of the crowd to play the guitar solo on “Wellington’s Wednesdays,” a ripsnorting number that also poaches a bit of New Order’s 1982 single “Temptation.” “It’s in the key of E,” says Samson as he hands over his guitar. The kid does just fine, to the crowd’s delight. The fans are so into it tonight, someone even calls out for “Elegy For Gump Worsley,” the heartfelt, spoken-word tribute to the Hall Of Fame goalie who won four Stanley Cups with the Montreal Canadiens in the mid-’60s. When another devotee shouts out, “Weaker than what?” Samson, to his credit, turns a deaf ear, refusing the stock, Marlon Brando-like  reply: “Whaddaya got?”

A spot on review of an amazing performance in SF! Every song a delight. The Weakerthans remain a well kept secret for folks who love great music without bravado! I am proud to be part of the US Weakerthans appreciation society!

I was there, the review nailed it.
The Weakerthans — one of the most underrated bands around.

I agree, The Weakerthans are the best.

The Weakerthans are a great Canadian band,but the reference to the Pointed Sticks was awesome.San Fran was always a great city for us to play,and we hope to make it back next year,when our new album(first in 30 years!!) comes out.Go to thepointedsticks.com or our MySpace for info.No Mabuhay Gardens,but at least Taquiera La Cumbra is still there at 16th and Valencia!!