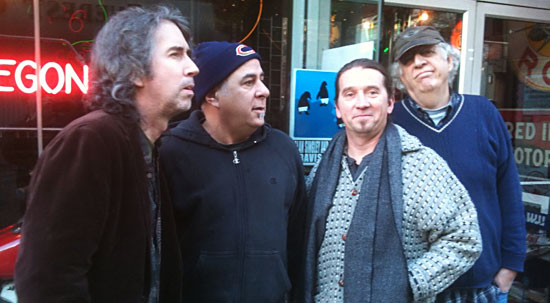 The Green Pajamas’ “Any Way The Wind Blows” (download):

Thursday, December 3
The weather forecast for Oregon and Washington early this morning was dismal as boatclub (no caps, no definite article, and they’re from Oakland, godammit, not San Francisco!) took off for a short tour of the great frozen Pacific Northwest to hook up with our buddies from Seattle, the Green Pajamas. Because even a rental mini-van was deemed too expensive for this budget-minded caravan, we decided to do the tour Nina, Pinta & Santa Maria-style with three of our personal vehicles. Since the jaunt was also to be a tribute to the Johnny Appleseed-like, LSD-greening of Oregon more than 40 years ago by the Merry Pranksters (writer Ken Kesey, former Jack Kerouac sidekick Neal Cassady, the peachfuzzed Grateful Dead and others) who daubed an old school bus with dayglo paint, dubbed it “FURTHUR” and aimed it north, we all assumed code names for the duration. Former Rain Parade guitarist Matt Piucci was “Jerry,” guitarist Mark Hanley was “Weir,” drummer Stephan Junca was “Bill the Drummer” and another ex-Rain Parade guitarist, John Thoman, was “Lesh.” I was “Kesey,” so I had to bring a notepad and pen and try to remain upright to make some sense of our voyage. Hanley rode shotgun with Piucci in his white Palm Beach-gangster “Big Pussy” LTD limo (limited to only 10 million); Junca and I lit out in my dark-red Mini Cooper; while Thoman and his wife Rachel lagged behind as most of the gear was stowed in his boxy little metallic green Honda Element. Junca and I tried to get the rest to pull over in Redding, 300 miles to the north, for a leisurely Thai lunch. But no, the siren’s song of fast food was too much for Piucci and Hanley who gulped something down in Weed, Calif. (“I knew you’d stop there. You’re so predictable!” I railed at Piucci on the cell.)  About 20 miles south of Portland (and 670 miles into our journey), as the temperature dipped into the low-20s, the tour was almost scuppered before it began. Stuck in the fast lane with a concrete barricade directly on my left, I attempted to pass a speeding 18-wheel juggernaut in the number-two lane. Just before I reached the midpoint of the maneuver, the trucker signaled and began to pull into my lane for reasons known only to him. With nowhere to go, we were about to be smashed like a mosquito as he inched ever closer (or worse still, swatted over the barricade like a badminton birdie into oncoming traffic). Without thinking, I slammed on my brakes, didn’t get rear-ended by the astute driver behind me and eased backward out of the danger zone just as the dimwitted trucker completed his lane change. Capt. Sully Sullenberger probably couldn’t have done it much better. We were too rattled to see if there was a “How’s My Driving?” sign with an 800 number on the back of his truck. We arrived at the beautiful, prairie-style home of Matt’s brother, Portland attorney Steve Piucci and his wife Melissa Powers, just in time to watch what was one of the biggest sporting events in Oregon history: the annual Civil War college football classic between Oregon and Oregon State, with the winner tabbed to play Ohio State in the Rose Bowl on New Year’s Day. The Oregon Ducks, wearing one of their myriad mix ‘n’ match uniforms, finally prevailed over the black-and-orange clad Oregon State Beavers to nab the roses. As an ice rink grows overnight on the deck outside, we dream of balmy Pasadena far to the south.

One reply on “The Green Pajamas And Boatclub Tour Diary, Part 1”

C’mon Jud, everybody knows that Pucci is bribing you with bootleg Rain Parade box sets imported from southeast Asia to say good things about him. And I have it on authority that Kelly has, likewise, found your sweet spot with Green PJs collectibles. Hardly the impartial observer we’ve come to trust, my friend. What’s next – a Flamin’ Groovies retrospective? 😉