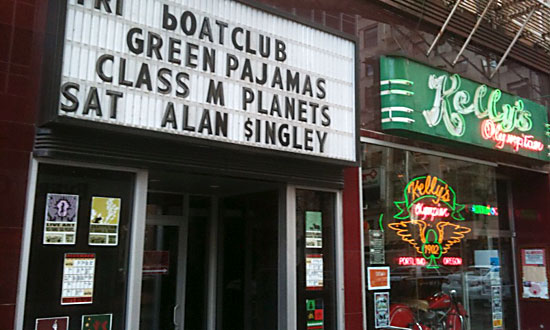 Friday, December 4
We mosey down to the Portland venue tonight, a tiny joint booked by Portland scenester/record mogul Jim Huie, called Kelly’s Olympian, decked out like a vintage biker bar with collectible Indian motorcycles hanging from the rafters. We take band pix in front of ancient gasoline pumps and under a huge purple octopus dangling from a shop across the street. It’s hard to believe I haven’t seen the Pajamas play live since we all flew together from Seattle to London in 1999 to play Terrastock III. Since then, Joe Ross is still on bass, but drummer Karl Wilhelm has been replaced by Scott Vanderpool, husband of Laura Weller, now Kelly’s able-bodied vocal (and guitar) foil. Eric Lichter still plays keyboards and contributes originals to each new LP (their most recent is the excellent Poison In The Russian Room on Hidden Agenda). Kelly and Ross, who founded the GPJs in 1982, are pretty pumped about finally getting to play with Piucci, whose Rain Parade was a template for their own band. “I always wanted to sound like Rain Parade,” Kelly told me years ago in a MAGNET feature. The Pajamas pay tribute to Piucci’s Crazy Horse roots by opening with their most Rust Never Sleeps-style number. A pair of shopworn, neo-psych gems are dragged out of the steamer trunk tonight by both bands. The Pajamas play “Kim The Waitress,” their college radio hit from the ’80s, and boatclub dusts off Rain Parade’s first single, 1982’s “What She’s Done To Your Mind.” Kelly’s mild protests about having to play “Kim” one more time are brushed aside by Piucci later at the bar. “Hey, it’s not as if you’re Brian Wilson and have to play ‘Surfer Girl’ for the 10-thousandth time,” he reminds Kelly in his booming baritone. Scott McCaughey (Young Fresh Fellows, Minus 5, R.E.M.), now living in Portland, shows up just in time to catch the live sounds. We yak about mutual pal Jimmy Silva (who died in 1994 after complications from chicken pox) and the Silva tribute album I’ve been working on for about two years, a set that will feature the Fellows, Minus 5, Jon Auer, Chris Eckman (Walkabouts), Dennis Diken (Smithereens), Roy Loney (Flamin’ Groovies) and Sal Valentino (Beau Brummels). Back in Steve and Melissa’s kitchen late that night, Thoman finally shows up with a couple dozen extra-large specialty items from Voodoo Doughnut. “They were about to close so they gave us some extras,” he says as he doles out chocolate-covered, glazed voodoo dolls with pretzels inserted in the chest in place of hatpins, as well as mammoth jelly donuts covered with Cap’n Crunch cereal. Blood-sugar testing is optional.