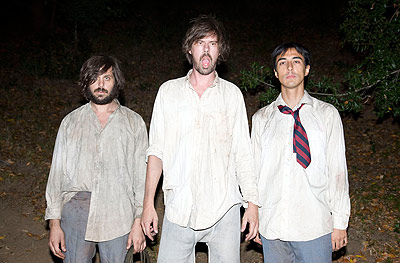 Liars return with Sisterworld, their fifth LP, due March 9 on Mute. Produced by Tom Biller (Jon Brion, Rhett Miller) and recorded in Los Angeles, the album is the first to be cut stateside for the band since 2004’s witchy concept album, They Were Wrong So We Drowned. Lead single “Scissor” sounds like the careful, measured loading of a soldier’s rifle. After a mellow start, with interweaving harmonies reminiscent of TV On The Radio, the song explodes and blows your head off with a fist-pounding, noisy refrain. Download “Scissor” below and get a taste of one of the most hotly anticipated albums of 2010. And read our 2006 feature on the band.

[…] Morning Download of the New Year we offer you this slice of 21st Century post-punk from Liars via Magnet. Their new album Sisterworld is due March 9 on Mute. The three piece recorded the album in LA and […]