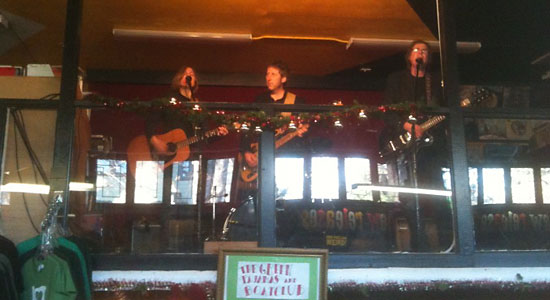 Saturday December 5
Music Millennium, a wonderful two-story independent record shop and a fine example of something that’s becoming a vanishing species on the American landscape, is our next stop for a 1:00 pm instore by both bands. Playing from a second-floor stage, they turn down the volume with a pair of superb, semi-acoustic sets. The most touching moment of every boatclub performance on tour has to be when Matt asks his brother Steve to join the band on keyboards for a pair of Rain Parade chestnuts: “This Can’t Be Today” and “Blue.” It’s also good to see former Bay Area resident Tim Hinely drop by with his button-cute two-year-old daughter, Sophia, in tow. I tell Hinely (who still publishes his own mag, Dagger, as well as contributes to MAGNET and Blurt) about the time I dragged my daughter to a 1978 San Jose instore to meet the Ramones as they signed copies of Ramones Leave Home. And now it’s time for boatclub to leave the comfortable home of Steve and “Auntie Mel” and hit the bricks to Seattle, 170 miles to the north. I’m staying with the Kellys—Jeff, Susanne, Jane and Tess—out in the U District (close to the University of Washington), but the rest are booked into Joe Ross’ guest house in West Seattle. I’ve logged plenty of time in West Seattle (interviews with McCaughey, True West and Fleet Foxes) and thought I knew my way around. Hanley and I soon spot Luna Park Cafe about two blocks from Ross’ place, but due to flawed directions from air traffic control, we somehow wind up back on the West Seattle Bridge, going the wrong way. The first off-ramp, instead of sending us under the bridge back in the right direction, shoots us due north on the 99 expressway instead, and we can’t get off. As Safeco Field (home of the Mariners), Qwest Field (home of the Seahawks) and finally Pioneer Square in downtown Seattle zip by in a blur, Hanley and I start laughing so hard the tears are rolling. Elapsed time to find Ross’ guest house must be a West Seattle record of 90 minutes. I finally arrive mumbling at the Kelly’s place, normally a very sleepy neighborhood, after getting stuck in post-UW Huskies vs. California Golden Bears football traffic. Just time for two beers, a few smokes and we’re off to the gig at The Lo-Fi Performance Gallery. Having recommended the venue to Ross, Bumbershoot artistic director Chris Porter is here tonight and seems open to a possible future date by both the Pajamas and boatclub at the esteemed Seattle festival. A surprise guest is none other than Pat Thomas, erstwhile guru of S.F.’s Heyday Records, onetime home to such lauded indie rockers as Chris Cacavas, Barbara Manning, Chuck Prophet and former Rain Paraders Piucci and Steven Roback. Thomas pulled up stakes recently to get his bachelor’s degree in nearby OIympia in order to become an English teacher. In spite of a semi-obnoxious, well-oiled heckler who insists on performing tumbling routines well beyond his modest capabilities while young girls continue to bring him drinks, the show goes flawlessly tonight, wrapping up with both bands joining forces for a 20-minute version of the Beatles’ Yellow Submarine staple “It’s All Too Much.” And it almost is … but not quite.