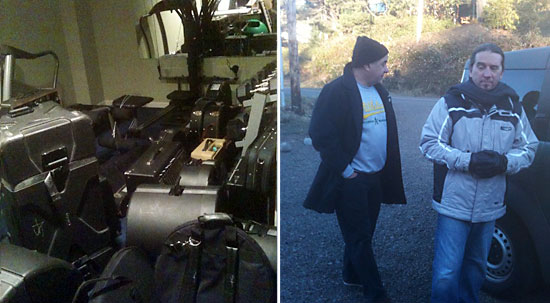 Monday, December 7
I awoke early on getaway day to what I thought was the sound of police sirens in the distance, a highly unlikely prospect in sleepy Manzanita, all but deserted for the winter season. It was only the bitter wind, now gusting to 50 mph, blowing through the rafters. Steve had pointed out the moonlit spot last night where they had once seen an elk in the wetlands that passes for their beach-front backyard, but even the local critters were bundled up early on this frigid morning. I went upstairs to watch TV, soon joined by John Thoman, wandering the battlements like Marley’s ghost. It suddenly occurred to me that I never once saw the guy eat or sleep during the entire trip, although he did claim he’d visited a few Dairy Queens somewhere along the way. Piucci got off the best one-liner of the tour (by borrowing a quote from a recent Bizarro comic strip) when he referred to Thoman as being a previous member of famed Aussie rock band OCD/C. The unflappable Thoman decided he would wake Junca, his copilot for the drive home, before the sun came up so they could get an early start. “The irony of this is incredible, John,” barked the groggy drummer at the guy who had been late for just about every time-check so far on the tour. “You’re going to get us killed, driving on roads like these in the dark!” To return south to the S.F. Bay Area from Manzanita, you first must drive 75 miles north, over another icy pass, all the way back to Portland, then aim due south for the final 690-mile drive home. We all made the return journey in one piece, although it took me two days to complete the open-road course. Driving solo now, since Rachel had flown home the day before and we’d reshuffled the deck, I held out until Redding about 500 miles to the south, just across the California border, before I started seeing chipmunks darting across the road that weren’t there. I decided wisely to shut it down. A couple episodes of Seinfeld, a Twix bar from the candy machine (it didn’t stick) and a good night’s sleep at the first decent motel I could find was just the ticket. Then a hearty breakfast at a nearby greasy-spoon truckstop, where the good old boys were loading up on steak, eggs, grits, gravy, pancakes and biscuits, and I felt like a new man the next morning.

One reply on “The Green Pajamas And Boatclub Tour Diary, Part 5”

Enjoyed every moment, Prof! Long may you and the guys run!