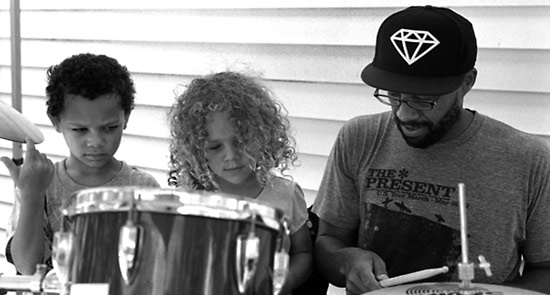 If you were an avid skateboarder in Philly throughout the ’80s and ’90s, it’s pretty likely that one of your heroes was Chuck Treece. He became a professional skateboarder at the age of 20, earning major endorsements and travelling the world for competitions and exhibitions. All the while, Treece was developing into a musician whose skills and devotion have served as an inspiration for countless Philly artists and music lovers over the last 20 years. The jack-of-all-trades musician (Treece plays drums, bass and guitar, all with unquestionable proficiency and passion) boasts a jawdropping resume that could fill hundreds of pages. He played bass on Billy Joel’s “River Of Dreams,” has worked on music for Sting and Amy Grant, slew guitar on the first Roots album and has rocked drums for Bad Brains all over Europe and the Goats at Woodstock ’94. The legendary skate punk band that he co-founded in 1983, McRad (a name suggested by Hüsker Dü bassist Greg Norton), is still going strong, playing blistering live shows and working on a new record. I caught up with Treece in his Northern Liberties loft, where he was getting ready to work on some tracks that just came in from his old friend Santigold. Video after the jump.

MAGNET: What do you think is a defining characteristic that makes Philly music unique?
Treece: I think what’s good about Philly is you get to see and be a part of a lot of different scenes. Philly is a very gypsy-like gathering, musically speaking. Like the cats from the Ortlieb’s crowd fizzled into the R&B scene, and then the church cats came in and added their thing. And now rock is becoming more sought after in all these scenes, with the guitars out front. So, people are completely collaborating. It’s gonna get to where hip-hop cats are gonna be like, “What does it take to write a great song?” and they can just go get involved in the singer/songwriter crowd and learn the tricks of the trade. It’s like we’re another Nashville in our own vein. At least that’s what I want it to be.

That’s interesting. So Nashville is revered for the country-inflected songwriter type of thing. How is Philly analogous to that scene?
Nashville took the soul of country and applied it to becoming a form of pop music, but without ever really selling out. But they just know how to cater to a certain ear. So it must be that people who like that sound have a certain way their brains are wired that when they take it in, it’s like they hear bells. The Nashville musicians perfected that. And it’s not just a few artists; it’s a whole genre of killer players and songwriters. What Philly is about is taking the soul, that history we have here, and putting it back into all the new bands. Like Jill (Scott) and Floetry developing their sound here, and all other kinds of stuff happened because people were just collaborating. Like, Quest would show up to something, and then next thing you know, all kinds of stuff would develop out of it. But the Nashville people realize that you have to tour and develop it. They’re playing all over the Midwest and South. They service their area properly. Whereas here, for some people it’s a trek just to go to New York, Boston or D.C.

As far as young, dedicated musicians and bands who want to make a living with music, would you tell them there’s enough here for them? Or would you suggest a move to a different scene?
I think there’s enough here because of the power of the Internet—if we can just get a great communal studio and just get people in collaborating. So many of us are already pros, and there’s great songwriters who know how to write on that level. Why not figure out what it’s like to be at the backbone of it at a business level? We gotta get people centralizing what they do so that, once these kids get out of school, they can know there is a scene that they can build on. West Philly, UArts, the Northeast. If we could get all these cats to write together, it would be wild.

Do you see an influx of artistic people moving to Philly once they come to visit and see how much creativity is here? Or do you think we will?
Well, I owned a house with my father in South Philly, and I just watched that neighborhood change so much. There are other people who left Philly and made a bigger jump because they wanted to fish in deeper water, and they didn’t mind spending the money to do it. But it’s cool because people are coming back and are now thinking, “Why don’t I figure out what I wanna be and do it somewhere where I can be more comfortable?” I think it’s good that people are moving in, but we gotta master how to centralize and keep those people interested in the underground and build the charm of that. So that people can start appreciating not only the Roots, but all these people the Roots found, and then start following that. I think people are moving in for the best reasons, and it’s cool because it’s what we’ve all created. All of us have a history here, and I mean, the scene is connected to at least 300-500 people when you really get down to it, which is great for a city that isn’t really a music-industry town anymore.

Any cons to being in Philly?
What we do in Phlly is ride the whole underdog thing to a point where we’ve just gotten weary. We gotta make something more positive out of it. Like, the next musical explosion that comes out of New Orleans will be about reviving the mess of Katrina, and hopefully it’ll create something really positive. Philly is on a comeback. So, if we can get all the music-school kids and bands and musicians and artists believing that and being centralized around that, we’ll really have something to say as a city. Like the point the Roots have gotten to. It shows you that you can literally develop something on Kater Street and take it right to the top. The question is just how much time are you willing to invest to make whatever you’re doing the best it can be.

People here can harden up.
Hardening up big time. It’s like, bills and responsibilities get in the way and people feel like they have to decide how much energy they have to give to music, because all these other people and concerns need to occupy their energy. It’s not that it’s wrong to think about that. But if you pile on all the complaining and the bullshit, then the time you actually dedicate to your music even gets hampered because of all that other stuff draining your energy. We gotta figure out how important music is to our lives. But we don’t give music the credit. If you take it away, everything will just fall apart. But music keeps saying, “I’ll keep standing here. I’ll always be here.”

What is one of your great musical memories?
Meeting Chrissie Hynde when I was touring with Urge Overkill. We ended up playing two shows with her, and we got a chance to play the Pretenders song “Precious,” and she played guitar and sang. It was wild being onstage with her energy. To see her doing her thing and I was playing bass, and that bass line is very demanding. So, it was cool to be like, “Wow, I’m holding this bass line and she’s about to sing that lyric that I’ve listened to on the headphones a thousand times.”

Who is a musician that you really feel is the pulse of Philly right now?
A person I’ve seen really grow into something is Amos Lee. Watching him do his thing is like, “Man, this cat put himself on the road and really learned what it was like to be a lonesome cowboy.” He put himself in the situation where you really have to learn how to deliver a great song. And it’s like he’s evolved who he is now. Instead of people comparing him to other people, like Dylan, people are taking him for his presence. You know, you have to develop your character around the microphone and monitors and people and noise and maybe not feeling great all the time and still have to make these records and entertain people. As far as an artist stepping on the stage, if you can’t relate to what this cat is doing, then you’re not feeling music.

Since you moved to Philly in 1982, what’s changed the most?
I think the only thing that’s changed is our personal experiences. The city’s always been vibrant. It’s all about craftsmanship here. If you create something good, Philly will open up and let you play 100 seaters, 1,000 seaters and more. The city caters to itself. The business is where we gotta learn how to come into it. That should come from us.

What are you most excited about working on these days?
The new McRad record. And I’m thinking about getting into scoring and figuring out that part of things, film and such. Hopefully, we can start doing that kinda stuff here in Philly, ’cause there’s so many great artists.

Chuck is an amazing artist, musician, skateboarder, father, and friend. Philly is lucky to have him.

Really? Shoulda coulda woulda if he wanted to.

[…] to our friends at haveboard.com, we get word today of an interview with Chuck Treece up at Magnet Magazine’s website. Take some time and read Chuck’s thoughts on what makes […]

[…] to our friends at haveboard.com, we get word today of an interview with Chuck Treece up at Magnet Magazine’s website. Take some time and read Chuck’s thoughts on what makes […]