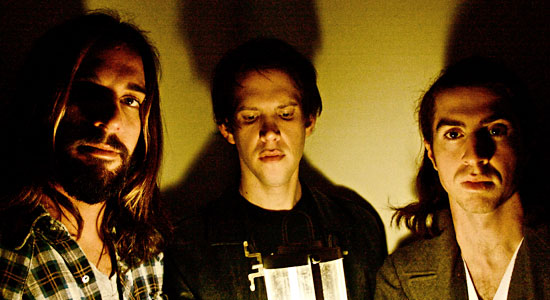 Like most bands, the Whigs—guitarist/vocalist Parker Gispert, drummer Julian Dorio and bassist Tim Deaux—have had to endure their fair share of rough patches during their eight-year existence, including major-label troubles and lineup changes, but perhaps these bumps in the road were merely the stars aligning for the Athens, Ga., trio. The label issues prompted them to record and release their debut album, 2005’s Give ‘Em All A Big Fat Lip independently, earning them the title of “the best unsigned band in America” from Rolling Stone. It wasn’t long before they were signed to ATO Records—which issued the band’s critically acclaimed second release, Mission Control, in 2008—and playing high-profile shows at festivals and late-night talk shows and touring with some really famous names. New album In The Dark is the Whigs’ grittiest and most explosive album yet. Ever the kings of the road, the Whigs are currently on tour in support of the release, but they’ll also be guest-editing magnetmagazine.com all week. Read our 2008 feature on the band.

MAGNET: In The Dark seems to be a bit different from your previous works, which is mostly credited to the addition of Tim. How did he join up with the Whigs?
Dorio: We were already friends with Tim before he joined, so he knew we were in need of a multi-instrumentalist. Getting someone we genuinely liked and someone we knew understood the band was important. It’s tough to fill a position that’s already been filled by someone else. We auditioned so many people but couldn’t quite figure it out until Tim played with us.

How did your songwriting process change with the new lineup?
Since we had a full band again, Tim and I were able to write songs from a drum-and-bass perspective in addition to Parker writing songs on guitar. So we doubled our productivity. Usually, Parker is writing songs and bringing them to us. This time around, we were also handing Parker verses, choruses, bridges, grooves, beats or whatever we had to let him react with melodies and guitar lines. It came naturally to us while also taking us out of our comfort zone.

I understand that you and Ben Allen, who produced In The Dark (and also Animal Collective’s Merriweather Post Pavilion), go way back. Is it helpful to have an old friend involved? What did he add to the process?
Working with Ben was very exciting for us. He has known the band since our first shows and demos so we were able to get right to work without explaining ourselves, our goals, our past. He is a complete and total profession who happens to also be an old friend. Ben had a way of pushing us to run with our strengths but also work on our weaknesses. The fact that we trusted his opinion made it easy to follow his lead and end up with some nice surprises in the studio.

You’ve toured a lot with big-name acts like Kings Of Leon and Drive-By Truckers. How has that influenced your music and live performances?
We’re influenced by everyone we share the stage with, and it was a privilege to learn from such pros as KOL and DBT. Of course, musically we’ve been fans for years, but there is so much more that wears off on us. Those bands’ generosity has had as much of an impact on us as their songs. And never for a minute do we think we’d be where we are today without their endorsement. It means the world to us.

Do you ever get tired of being on the road so much?
We definitely love touring! It’s never-ending, but that’s why we started a band in the first place: to play for a live audience!

How have fans been reacting to the new songs when you play them live?
The fans’ reaction has been great. It’s always exciting to premiere new songs. And if we’re opening up for another band, their audience may not know which songs are old and new, so it’s cool to see them respond to the new material and ask which CD it’s on. Until now, it hasn’t been available!

You recorded and released your debut album independently, but Mission Control and In The Dark were released through ATO Records. What do you think you learned from the DIY experience?
It reminded us that even though the music business had grown and grown, the music is still number one. We couldn’t do a lot of what we do without the help of ATO. It has been a great home for us, but bands shouldn’t wait on record contracts before writing, recording and releasing songs they believe in.

Has being involved with a label affected how you create music?
Sure it does. We made sure to work with people who we like and trust, and as we make the music we want to make we also welcome their feedback. It was important to us that ATO loved the music we were making before working together. There’s a difference between a label trying to change a band and a label simply encouraging us to be the best we can.

From a band that’s played its fair share of shows on the late-night talk show circuit, I have to ask: Who’s cooler, David Letterman or Conan O’Brien?
Hmmm. That’s tough. It doesn’t get much cooler than Letterman, and that was the first late-night show we ever played. And we really enjoyed chatting with Conan after our performance. Both rule!

One reply on “Q&A With The Whigs”

Thanks for this article. I Love The Whigs! GO WHIGS!