Like most bands, the Whigs—guitarist/vocalist Parker Gispert, drummer Julian Dorio and bassist Tim Deaux—have had to endure their fair share of rough patches during their eight-year existence, including major-label troubles and lineup changes, but perhaps these bumps in the road were merely the stars aligning for the Athens, Ga., trio. The label issues prompted them to record and release their debut album, 2005’s Give ‘Em All A Big Fat Lip independently, earning them the title of “the best unsigned band in America” from Rolling Stone. It wasn’t long before they were signed to ATO Records—which issued the band’s critically acclaimed second release, Mission Control, in 2008—and playing high-profile shows at festivals and late-night talk shows and touring with some really famous names. New album In The Dark is the Whigs’ grittiest and most explosive album yet. Ever the kings of the road, the Whigs are currently on tour in support of the release, but they’ll also be guest-editing magnetmagazine.com all week. Read our brand new Q&A with the Whigs and our 2008 feature on them. 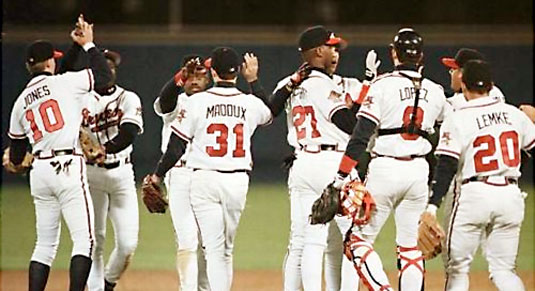 Second Base: Mark Lemke
The guy’s nickname was “Dirt.” This, along with his clutch hitting in the ’91 postseason, is enough to propel him into the starting lineup.

Third Base: Terry Pendleton
My only other viable option is Chipper Jones, which makes this an easy decision.

Shortstop: Rafael Belliard
Pac Man was a defensive force who hit two—yes two—career home runs in 16 years. This gives him the MLB record for most at bats in between homers (almost 2,000). The reason Belliard is on my list is because of a suicide-squeeze bunt he shredded in the only World Series the Braves have won in my lifetime (1995).

Center Field: Otis Nixon
Speaking of rock stars, this guy stole more bases in one season than any Brave in history. The impressive thing was that while he did this, he was using crack cocaine! No wonder he was so fast. He is the only player to ever make the final out of a World Series with a bunt. (Side note: His current On-Track ministries helps people get their lives “on-track.”)

Left Field: Keith Mitchell
Though only linguistically, the closest thing the Braves ever had to Kevin Mitchell.