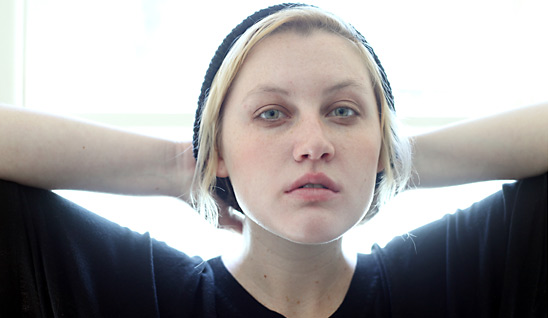 One listen to 24-year-old Texas native Sarah Jaffe’s music and you’ll feel like you’ve known her for years. Her debut full-length, Suburban Nature (out May 18 on Kirtland Records), will take you on a walk through her life. It features songs written from when she was a teenager until now, lyrics so intimate you’ll feel like you’ve read her diary and a focus on her lovely, smoky voice (as if she’s whispering directly into your ear). Plus, this mix tape she made for MAGNET definitely makes us feel like we’re in best-friend territory. Fresh off tours with Midlake and Norah Jones (which included performances at SXSW and NX35), Jaffe will play several dates in her home state during the month of May in support of Suburban Nature.

Harry Nilsson “Everybody’s Talkin'”
When I moved to Denton, my good friends turned me onto Harry Nilsson, since I clearly missed the boat. He’s now one of my favorite artists. Genius melodies. Wonderful writer. Video

Readymade FC Featuring Yael Naim “The Only One”
Readymade FC is a composer that I met through Robert Gomez, who plays with me. Robert showed me this song, and then the video, and I just fell in love. Video

Björk “Joga”
I remember hearing this song when I was about 10, and it rocked my little world. It was nothing like I’d ever heard. Gave me indie cred in the fifth grade. Video

Nina Simone “Wild Is The Wind”
Someone asked me the typical question, “If you were trapped on an island, what’s the one song you’d choose to be stuck with?” “Wild Is The Wind” was my pick. Moves me every time. Video

Passion Pit “The Reeling”
My friend Paul turned me on to this band about a year ago, and I haven’t stopped listening to Passion Pit since. I really love electronic music. And they get me where I need to be gotten in that realm. Video

Toro Y Moi “Talamak”
My friends and I make mix CDs for each other on occasion, and this song was on a mix CD a friend gave to me. I just think it’s a wonderful song by a very cool emerging artist. Video

Grizzly Bear “While You Wait For The Others”
There’s nothing good that hasn’t already been said about this band. They’re golden. This song and album are probably in the top five for the year. Video

Shelley Duvall “He Needs Me”
Again, love Harry Nilsson, who wrote this. Obviously was not old enough to catch the movie Popeye when it came out, but found out Harry wrote the music for the film. And loved it. Video

The Ronettes “Be My Baby”
A classic go-to song for me. Makes me feel happy and loved, and then I impulsively wanna call everyone I love. Video

cool song and playlist. she kind of reminds me of forest city lovers.

[…] “One listen to 24-year-old Texas native Sarah Jaffe’s music and you’ll feel like you’ve known her for years. Her debut full-length, Suburban Nature, will take you on a walk through her life. It features songs written from when she was a teenager until now, lyrics so intimate you’ll feel like you’ve read her diary and a focus on her lovely, smokey voice…” – Magnet Magazine […]