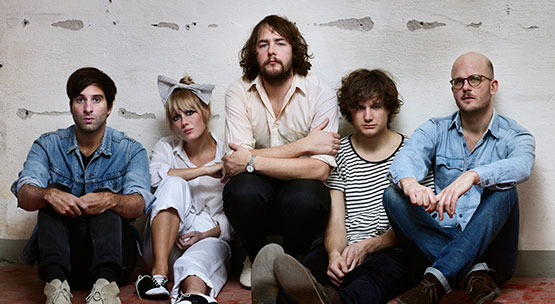 Not long after the release of their second album, 2007’s Our Ill Wills, and months of relentless touring, Sweden’s Shout Out Louds decided to take a six-month break, and its five members—frontman Adam Olenius, bassist Ted Malmros, guitarist Carl Von Arbin, drummer Eric Edman and keyboardist Bebban Stenborg—spread out between Melbourne, Los Angeles and Stockholm. However, despite the distance, it wasn’t long before Olenius was writing new material and sending it out to his bandmates, who all contributed from their remote locations. As a result, the quintet has returned with a fresh, simple sound on third full-length Work (out now on Merge), which the band is currently supporting on a tour of North America and Europe. Shout Out Louds will be guest-editing magnetmagazine.com all week. Read our 2007 feature on the band.

MAGNET: After the release of Our Ill Wills, you all took a six-month break and scattered around the globe. Were you just sick of each other by that point?
Olenius: No, sick of following a tour schedule. To make your own plans and be an individual, not a band, all the time. We did realize that being in a band wasn’t that bad, so the break didn’t last that long.

Most of Work was written while everyone was separated. How do you think the long distance affected the making of this album?
Writing most of the songs in Melbourne gave me more time to think about home (Stockholm) and what we wanted with the band. It gave the songs a little bit more freedom, and I felt less pressured. But we arranged and added everything at home in Stockholm, so it was also a homecoming album.

Had you been planning to write while you were technically on hiatus?
I write all the time, but I tried not to the first week. But then I wrote “Walls” and started working again. That song was sort of a starting shot.

How does it feel to be back together now?
Good. We’ve just finished our European tour, and everything feels really great. Less drama, more fun. We bought bikes in Hamburg and got in a fight in Copenhagen. All good.

Work is simpler and more stripped-down than your previous albums. What inspired that change?
We talked about it during the last tour, and we wanted to focus more on our own instruments, so every part becomes clearer. John Cale, the Velvet Underground and Fleetwood Mac played a big part, too.

How did you join up with producer Phil Ek? What was it like working with him?
Phil is grand. He pushed us to make that special take and is a good listener. I sent him three crappy demos, and he liked them. Our people called his people, and here we are. Seattle was great, too. We had Campari and juice in a bar that someone from Soundgarden owned or something.

Shout Out Louds have fans all over the world. Why do you think your music resonates with such a wide variety of people?
It sounds like a bad cliche, but we’ve always aimed for a timeless sound and lyrics. We’re also a band that is still curious and doesn’t mind playing for 25 people in Salvador.

Do you have a favorite country for touring?
We’re a little bit tired of German sausages and cold Sweden, so let’s go with America.

Speaking of touring, since you’re on the road a lot, what are the essential items you always bring along with you?
A lot of Swedish music. (Buy the new Radio Dept.!) We have Ikea everywhere, so food is not a problem. All the seasons of Top Chef and The Wire. And NyQuil.

One reply on “Q&A With Shout Out Louds”

[…] week in preparation for the kick off of their US tour this Sunday at the 9:30 Club in DC. Read the Q&A here and check back every day this week for new entries from Bebban, Carl, Ted, Adam & […]