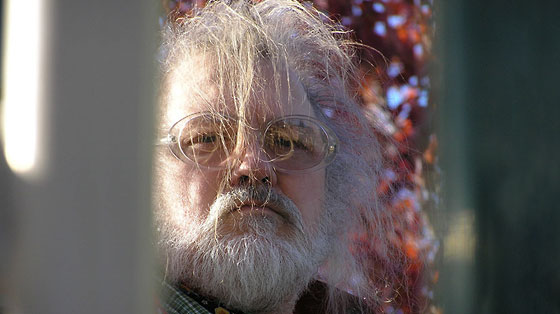 Falkner: R. Stevie Moore has become somewhat of a pen pal, and I am so proud to know him even if, for now, it’s just in a virtual sense. His music is impossible to define, and his output is staggering, with somewhere near 30 records released since the ’70s, all of which contain true gems that very few have heard. I not going to get into the “why isn’t this guy more famous?” bullshit that I hear regarding his (and even my own) career, because the thing to concentrate on here is R. Stevie’s dedication to his beautifully bizarre take on popular music. These are brilliant pop—and I mean pop in the classic sense—songs he writes, but the really interesting part of his process is the way these songs get arranged and recorded: very experimental, “bedroom recording,” greatest song ever thrown into Dr. Demento‘s blender. You know, people toss around the DIY term left and right, but this guy is a one-man do-it-yerself army. Favorite tracks of mine are “I Hope That You Remember,” “Play Myself Some Music,” etc. Get it all. We will collaborate on something soon and spew it into the universe.

Thanks for the awesome post about the awesome R. Stevie. Minor point: I think it’s actually been a bunch more than 30 albums that he’s released since the 1970s — although I DID go to public school and can’t be positive.

(Thanks for the great post/article! Can’t wait to hear that collaboration!)

Yeah..perhaps the editor (if there is such a thing these days) made a mistake. I think it’s more like 300 records. But he could have been referring to actual LP and CD releases on labels besides what RSM has made available through the mail.

Jason was referring to actual albums, not cassettes, CD-Rs, etc.