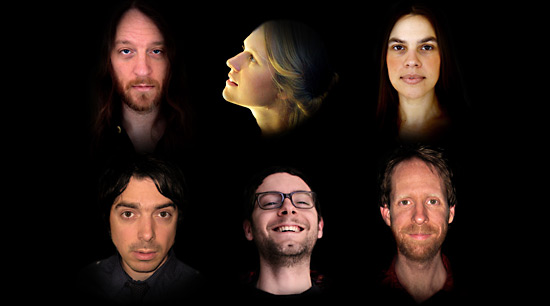 We knew MAGNET contributor Patrick Berkery was a huge fan of Lindsey Buckingham, which is why we asked him to interview the Fleetwood Mac guitarist/vocalist back in 2008 for this Q&A. We didn’t, however, quite realize the depths of Berkery’s fixation with Buckingham. And, more specifically, with Tusk, the 1979 Mac double album that Buckingham decided to take in the complete opposite musical direction as 1977’s massively successful and polished Rumours. It turns out Berkery (who’s played with Danielson, Pernice Brothers, Bigger Lovers, Mazarin, Photon Band and others) decided to start a band called the Lindsey Buckingham Appreciation Society with the sole purpose of covering Tusk live in its entirety. But that’s not the weird part. The weird part is that Berkery actually found five other musicians to join him in this endeavor: Charlie Hall (Jens Lekman, War On Drugs, Windsor For The Derby, Tommy Guerrero), Tony Goddess (Papas Fritas, Jenny Dee & The Deelinquents), Samantha Goddess (Jenny Dee & The Deelinquents), Dave Hartley (Buried Beds, War On Drugs, BC Camplight) and Birdie Busch. The not-so-super-group group is playing  Cambridge, Mass., on Saturday; Brooklyn on Sunday; and Philadelphia on Monday. We asked Berkery to tell us how this whole thing came together.

There are albums I consider to be among the finest ever recorded—Revolver, Exile On Main Street, The Chronic, Kind Of Blue, the Pretenders’ debut, Physical Graffiti—that I hardly ever listen to these days. Don’t really need to. They’re all embedded in my mental hard drive, spinning in heavy rotation in my subconscious.

My relationship with Tusk is different. I’m not certain it is one of the finest albums ever made. Depending on my mood, it might not even be my favorite Fleetwood Mac album. (Rumours is pretty freaking flawless.) But if I don’t hear it once a week, I’m just not right. I love it that much. I haven’t sought a professional’s opinion on the matter, but I’d guess that love stems from a childhood fascination with the title track, which I first heard blasting from the upstairs jukebox at Jim’s Steaks on South Street in Philadelphia in the summer of 1980. All that silly grunting and shouting and the marching band and the wild drumming (not to mention the video, shot at Dodger Stadium) can really make an impression on an eight-year-old.

Years later, that fascination morphed into an obsession with a double album some see as Lindsey Buckingham’s exercise in intentional subversion, but I’ve grown to view Tusk differently. Yes, it’s a fairly radical left turn from Rumours. But get beyond Lindsey’s crude recording techniques and a lack of anything that sounds like “Dreams” or “Go Your Own Way” and you’ll find a cohesive and enduring creative statement that’s not so “weird” or “difficult” at all.

At various points, I’ve obsessed over the sequencing (the lush “Over And Over” into the harsh two-step of “The Ledge?” to open the follow-up to one of the biggest albums of all time? Brilliant!), the drum pattern (or lack thereof) on “What Makes You Think You’re The One,” how the record owed so much to Lindsey’s musical heroes like the Beach Boys, the Everly Brothers and Elvis in an era of new wave, disco and bloated stadium rock, how “I Know I’m Not Wrong” and “Sisters Of The Moon” didn’t become massive hits, and how even though Tusk is widely viewed as Lindsey’s baby, Christine McVie’s songs are really the ones that make time stand still. (You have no idea how close this little collective came to being called the Christine McVie Appreciation Society.)

My obsession has manifested itself in other ways. Like making mental notes whenever I saw another musician professing their love for Mac, particularly Lindsey and Tusk. That’s how I got to know Tony Goddess. I’d read an interview where Tony said his goal for Papas Fritas was to sound like “the Replacements live and Fleetwood Mac in the studio.” (And if you’ve heard any of PF’s records, especially Buildings And Grounds, you know Tony was walking it like he talked it.) I figured this is the kind of guy I’d like to make a Bigger Lovers record with some day. And we tried, in fact, but the band broke up before we really got started. It had nothing to do with Tony.

Friends even began “fixing me up” with other dudes who shared my love of Lindsey and Tusk. That’s how I met Charlie Hall. And shortly after we were introduced, we found ourselves doing what musical obsessives do: sitting in a living room, drinking, dissecting our obsession and hatching a crazy scheme. Like the possibility of maybe … someday … seriously??!! … putting together a fun little band to cover the Tusk album live, top-to-bottom. Did I mention we had been drinking?

As happens with musicians in their 30s, life got in the way and the idea was back-back-back-back burnered. Until Charlie e-mailed me one day in the spring of last year and suggested we finally get moving on this crazy idea. So we got moving, deciding that I’d play drums, Charlie would play guitar and keys and sing a little lead, and that Tony Goddess had to be involved.

Tony was the first and last guy I was considering to be our Lindsey. If he couldn’t or wouldn’t do it, I wasn’t doing it. After some careful consideration and some schedule shuffling, Tony agreed on one condition: He wanted his wife, Samantha, to join us. How Lindsey is that? Good call on Tony’s part, because Sam’s voice and musicianship have added a ton to these songs.

We invited Birdie Busch and Dave Hartley into the mix and just before Christmas last year set about demystifying some of these songs to see if they could be pulled off live. As we spent the better part of an afternoon strumming through “Save Me A Place” and taking awkward initial stabs at “Tusk” and “Sara,” three things revealed themselves:
1) For a record that cost nearly $1 million to make (in 1979 dollars!), most of these songs were very loosely performed and arranged.
2) For all the copious amounts of cocaine the band was supposedly ingesting in those days, a lot of these songs are really slow.
3) These songs are an incredible amount of fun to play, especially when you take liberties with them, which we’re doing. Plenty.

And now here we are, a silly idea about to come to fruition. I can safely say this is something none of us expected we’d be doing this time last year.

One last thing: Anyone know of a marching band that will play for drink tickets?

2 replies on “They Are The Lindsey Buckingham Appreciation Society”

this is a year or so later and i don’t know if you guys pulled it off, but you could try to get a high school band from the new orleans area who might do it for publicity and travel expense. our high school bands cut their chops at mardi gras so you could even pick one by visiting. st. augustine and o.p. walker were standouts this year.

also i want to be sworn in; lindsey was the first guitar player i ever heard. in fact my parents would put the headphones on me when i was a tot with fleetwood mac, the beatles white album, and randy newman good ole boys. what a twisted appreciation did that develop!