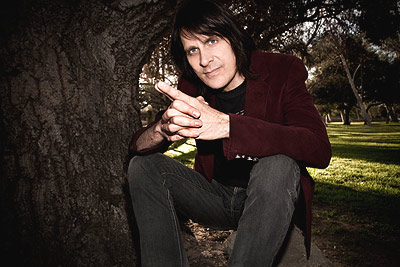 At the age of eight, Orange County resident Rusty Anderson began teaching himself how to play the guitar. At 13, he started his first band, which opened for such acts as the Police, the Runaways and Van Halen, but they never recorded an album. At 34, he founded Ednaswap, which toured with No Doubt, Weezer and Local H, and originated the song “Torn,” which was later covered and popularized by Natalie Imbruglia. Almost 20 years later, Anderson has played with some of the most recognized names in music, including Elton John, Willie Nelson, Joe Cocker, Gwen Stefani and Regina Spektor, and has held a gig as lead guitarist for Paul McCartney for almost a decade. Though his list of exploits is far from short, Anderson continues his musical endeavors with Born On Earth, his sophomore album, due August 3. MAGNET is happy to premiere “Where Would We Go?” This folk ballad to his wife is infused with lighthearted acoustic plucking and sweetly sincere “sha la la la la”s. Anderson’s laid-back Cali upbringing gives a beach-house vibe to the jazzy tune, producing a sumptuously summer sound.