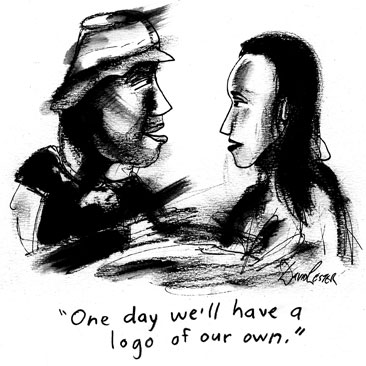 A couple of weeks ago, I was riding my bike toward the back-door entrance of my regular pizza joint. The usually friendly, but now scowling, owner suddenly appeared in the doorway and threw something in my general direction. It landed 10 feet in front of me in parking-lot gravel. When the owner saw me—I’m one of his regular customers; he usually has my slice on the paper plate before I even know what I want; we’re tight, man—his scowl quickly turned to mortification, and he ducked back inside. I proceeded toward the back door to see what he’d angrily flung out of his pizza parlour. A mouse! Lying peacefully on its side, its eye clenched closed. Perhaps it is well known in urban mouselore that when the landlord catches you by your tail and flings you at a customer it is best to play dead—eyes closed, body limp—until this confusing time of danger has passed.

I got off my bike, flipped out the kickstand, thinking, “What am I gonna say to pizza guy?” Holy cow, awkward. Yet, in a way, I was delighted and thrilled at the potential. I could say, “You missed.” I mean, it’s not every day a pizza vendor hurls vermin at a regular customer.

He’s a shy guy and until he recently started guessing what I wanted, he really only said “$1.50” and “thank you.” Now our thing—our burgeoning comedy of commerce and selection—was in jeopardy.

I was semi-dreading our interaction and yet gleefully assessing how this could play out: What funny thing might I say? He didn’t see me look at the mouse. He was already inside.

I walked up the wooden stairs, down the hallway past the kitchen. He was at the sink, washing his hands furiously, looking over his shoulder, waiting for me to arrive, so that I would see him washing his hands. If he’d started washing his hands immediately after the mouse-chucking, he’d have been washing longer than anyone actually would. I had to put the lock on the bike, stuff the empty Tupperware from the back basket into my packsack and then walk the length of the building before seeing him at the sink.

This was a logical response to the problem. To have me see him washing his hands. Fair enough. I proceeded to the front window, where the slices are displayed in a case visible from the sidewalk. Nothing with olives, so I had to make a choice. I hoped we could resume our pizza guessing game—basically I act amazed and take whatever he gives me—but not today. I forget what I asked for, but he was all-business, grabbing my slice with the tongs, getting it onto the paper plate, sliding the glass case closed. Pro-fucking-ficient.

Damn. Rapport reduction implementation. This was not good. He didn’t know I’d seen the mouse, but smart remarks by me would not be funny, so I made my decision.

“Thank you,” I said and took the slice of pizza as if I hadn’t seen him throw a mouse out the back door of his restaurant—a visible proclamation that this was not the first mouse he’d ever seen in his pizza establishment. Really, by the time a pizza man is flinging mice out the door by the tail, you get the idea that there is a war going on in there.

I hope it was a trapped mouse and not a poisoned mouse to be picked up by the scruffy gang of ne’ er-do-well crows that hang out on that block: mouse-eaters, no doubt.

I remember ordering a bowl of something a guidebook recommended while trying to get the gist of how to feed myself in Bangkok. Rice and something under florescent lights, everything awkward in that first week of travelling two months alone in Southeast Asia. Eating the vegetables off the top, wondering what the black specks in the rice were—maybe sesame seeds? Leaning down to look closer. Bugs.

I’d dyed my short hair back to brown, obliterating the blonde sections I twisted into three or four spikes—I didn’t want to attract attention, although being a white woman alone in India attracts attention regardless. By the time I got to Jaipur, maybe a month later, the sun had faded the brown dye, revealing the lighter sections, which, in 1985 were associated with punk. I was very surprised when a young guy approached me in the street asking if I was a punk and if I was, what was I doing there, in Jaipur, the Pink City, wandering around without answers, it would seem.

“Because of your hair.”

I didn’t know what it meant to him to be a punk in India. I was pretty sure I didn’t want to be whatever he thought a punk was. I knew I didn’t want to be what men thought a Western woman was. I forget what happened. I probably got rid of him, but there was a guy in Jaipur who had lived in Europe and he wanted to buy me a new suit of clothes and take me on his motorcycle to visit a palace. I agreed; I forget why. He took me to a tailor who measured me and the next day, at the beginning of our adventure, we returned to the tailor to get my new outfit: cotton shirt and baggy pants. A typical Indian outfit, maybe more for a man than a woman, and this was to be in navy blue cotton that we had selected from bolts of fabric leaning against the wall.

The tailor handed me the outfit and I was shown to the back of the shop to change behind a curtain. While in India, one is always considering potential scams and dangerous situations. This was one of the very few times I entered into associations where I was putting myself in possible danger. Who was the guy? Why did he bring me to this particular shop—what was really going on? Questions that are not part of life in Vancouver. I could hear the two men talking while I put on the new clothes which were clearly not made for me. The sleeves were very long and the pant legs dragged on the floor. I came out from behind the curtain to show them—but motorcycle guy was satisfied and the tailor was happy. I was encouraged to put my Western clothing into my bag so we could set off to the palace to participate in a sort of Alice In Wonderland meets The Emperor Has On Really Big Clothes mind warp. I rolled up the sleeves and pant legs and got on the back of the motorcycle. After a month of travel by train and bicycle rickshaw in cities, the winding road through the jungle, strange colourful birds screeching, monkeys howling, cool breeze, no helmet, going christ knows where with god knows who … or whom … wearing satan knows what—a man’s suit of clothes?—was somehow OK. I forget why—I was 25 at the time. I wanted to know the story behind the clothes, the measuring episode, the falsified exchange—what did it mean? What had I entered into? Who was I to them?

The palace was deserted except for an extremely old attendant wearing a brilliant pink turban. Motorcycle guy told me the pink meant the man was from the lowest caste. To this day, 25 years later, when I see the old guy standing outside the bank—in the same block as the pizza joint and the scruffy crows—wearing bright yellow security company garb plastered with logos and a brilliant pink turban, I think of the palace in the jungle, my ill-fitting navy blue outfit, the fading hair dye revealing something I felt I should hide—my urge to know how I was seen so that I could intervene and represent—to explain the nuances of who I am and now, how vastly impossible that endeavour seems as I am further stereotexted—regarded as woman-of-a-demographic-that-clearly-doesn’t-matter-much to those who think they already know.