Kim Richey spent the initial portion of her 15-year career chafing at various stylistic restraints, some self-imposed, others foisted upon her by others. Through the second half of the ’90s, the itinerant daughter of a Dayton, Ohio, record-store owner sampled and discarded various guises: new-country misfit (1995’s Nashville-friendly self-titled debut), Lucinda Williams in waiting (1997’s calculated Americana stab Bittersweet) and top-40 hopeful (1999’s super-slick Glimmer). And while those albums had at least two things in common—great songwriting and a soulful, not-in-the-least-bit-showy vocal approach—it wasn’t until more recently that Richey locked into a groove all her own. That in mind, Wreck Your Wheels (Thirty Tigers), her sixth and latest release, finds the artist reveling in a friction-free comfort zone somewhere along the well-read, emotionally honest folk/pop continuum. Richey will be guest-editing magnetmagazine.com all week. Read our Q&A with her. 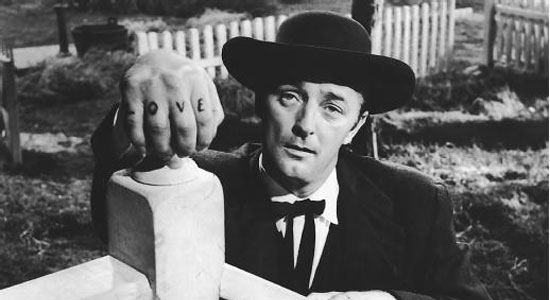 Richey: Being the escapist I am, going to see a film on my own, in the afternoon, sitting so far up front I’m almost in the movie, is about the best thing there is. I love movies. Some of my favorites:

The Night Of The Hunter
Robert Mitchum is the coolest, sexiest, creepiest, scariest villain ever. Also starring Shelley Winters and Lillian Gish. This is the only film Charles “Captain Bligh” Laughton directed, I believe. When this movie came out, it was so poorly received that Laughton never directed another film. I stumbled across it at the video store when I was going through a Mitchum-movie phase and had never seen anything like it. Still haven’t.

The Blind Swordsman: Zatōichi
Starring and directed by Takeshi Kitano. “Zatōichi wanders into a town run by sinister gangs and a powerful samurai. He’s destined for violent showdowns when he stumbles on two beautiful geishas avenging their parents’ murder.” I don’t even know where to begin to describe this. It is listed as an action/comedy/crime drama, never mind the all-in tap dancing musical scene. I went to see this the first time because it was the only thing on at the time I turned up at the cinema on a really hot day looking for some place with air con. What a great surprise.

Spirited Away
A beautiful animated film by Hayao Miyazaki. A sullen 10-year-old girl finds work in a bathhouse for the thousands of Japan’s gods and spirits after her parents are turned into pigs. Really. “This is the coolest movie ever, Aunt Kimmie,” said my nephew Luke. I made him watch it when he was eight years old. I agree.

I’ll stop now with the movies or I’ll never get anything else written.

You would love A Face In The Crowd. My favorite movie. Directed by Elia Kazan & starring Andy Griffith, Patricia O’Neal, & Walter Matthou. And the debut of Lee Remick. By far the most beautiful woman ever!